HOVERBOY FANDOM ACTION ALERT!! NOT ON A FRIDAY!

Yeah, it's not Friday. You gonna get all tough about it now?

This was passed along to ART LAND from RICK GREEN, co-curator of the Hoverboy museum, along with myself and Marcus Moore.  It seemed important enough to the world of Hoverboy fandom to pass along to you. 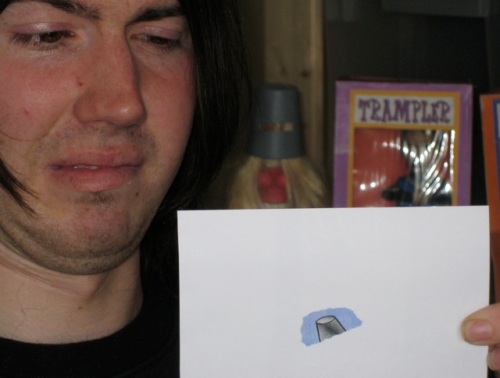 "Please help me, internet people. It looks like this."

I have a question about a Hoverboy comic book that belonged to my brother.  He is dead after complications during surgery.  It was real ironic, because he went into the hospital for a penis enlargement to make his wife happy, and since he died on the operating table she’s been really happy and getting a lot of action from my brother’s friends.
I guess the lesson is, stay in America and have the surgery done by a certified Doctor.  When you figure what he spent on airfare to Guatemala it wasn’t much of a savings.
Anyway, although my brother didn’t leave a will, I’m sure he would have wanted me to have his Hoverboy collection.  Which is good, cause I DO have it.  There are comics and a lot of action figures and some model kits.

My late brother took real good care of the comics, preserving them in plastic bags.  Only, having been to my first comic book convention last month I

"This is more of a close up, so you can see it better. It looks like this."

realized the bags are supposed to be clear plastic.  My brother died never knowing he had it all wrong, which is probably a mercy.  Some of his comics, or rather, my comics, are in mint condition.  Some are not.  Apparently rats can chew through plastic.  (I hope they can’t chew through aluminum or that fancy coffin we got for my brother was a waste.)

I’m trying to reassemble the most damaged comics so I can sell it on E-bay as a kind of tribute to my brother.  But here’s the thing, I have this scrap of comic and I can’t figure out which issue it is from.  Even the guys at the comic convention couldn’t figure it out.  Can you help?  (This is actually a photocopy, blown up a bit.  The original is back in it’s plastic bag in a rat proof chest of drawers.)
Thanks.
Josh Hervey

"This is as close as I can get it. It's already going fuzzy. But it looks like this."

PS:  It’s not this cover below.  I thought it was, because the sky is blue behind his head, but then I realized two things.  1)  You can see Hoverboy’s eyes in this cover, and 2)  My copy of the cover is the one I scanned, and you can see the head is still there.  So it’s not this one.  But I don’t know which one it is.

———————————————————————-
Okay, gang.  Can we  help a fellow Hoverophile out of a jam?  Does ANYONE recognize the cover image Josh has got that bit of?  If you know, send us an email or drop us a comment.  We’d like to help this poor sap, and we’ve done our part.  Now it’s up to YOU.
And did you notice the Big Chested Hovergirl toy from 1966  he had in the background?  And I think a TRAMPLER Mint in Box!  Lucky Bastard to have his brother die on him like that.  My brother doesn’t have any Hoverboy toys, so I have no reason to wish him dead.  But boy, if he did…
Ty the Guy
Oh, and don’t foret to go HERE, which is HOVERBOY.COM the home of the Battlin’ Bucket online, where you can read webcomics, watch cartoons, download comics and so much more!!  Art Land website assumes no responsibility if you are injured while at the Hoverboy Museum, and remember, it is for entertainment purposes only, no vendors allowed.  Void where prohibited.  Please keep an eye on a swim buddy and keep your hands inside the cabin at all times.  Thank you.

5 responses to “HOVERBOY FANDOM ACTION ALERT!! NOT ON A FRIDAY!”