And now, with just a little further ado, we bring you the Saturday Morning Comics.

Oh, those silly space rogues, what will they get into next week?  I wish the hell I knew– who has time to write that far in advance?

In the meantime, here’s—

This blog was originally set up to scan and sort out all the original art and old unprinted things I’d done in the eleven decades I’ve been in the biz (starting as a ghost inker on “THE YELLOW KID”) .  In my most recent bout of going through  “THE PILE”, I came across some comic strips that I’d done for my high school paper… in COLOUR!  (I have no recollection of  a colour edition of our high school paper, but I remember things about as well as that Dorrie the fish character  from….you know…that movie with the fish– so anything is possible.)

But I scanned ’em, and now you get to laugh at them (for all the wrong reasons at this point) and see where it all began…with no apparent talent whatsoever.  Oh, yes, I was a little influenced by Doonesbury back then.  I was sixteen, and at that age, one’s instinct is to directly steal someone else’s style and skills.  It’s why teen girls love vampire stories–ALL teenagers are vampires in some way, the little shits.

And now, after so much ado, I present, the crappy work of a 16 year old Ty.

It's funny because it's true, I think.

I’m getting all nostalgic for a time when people sat in bars without open carry weapons.

Here’s another one from the days when TV was a broadcast medium.  I might put up more of these cave paintings next week, unless someone stops me with an injunction.  You’ve been warned. 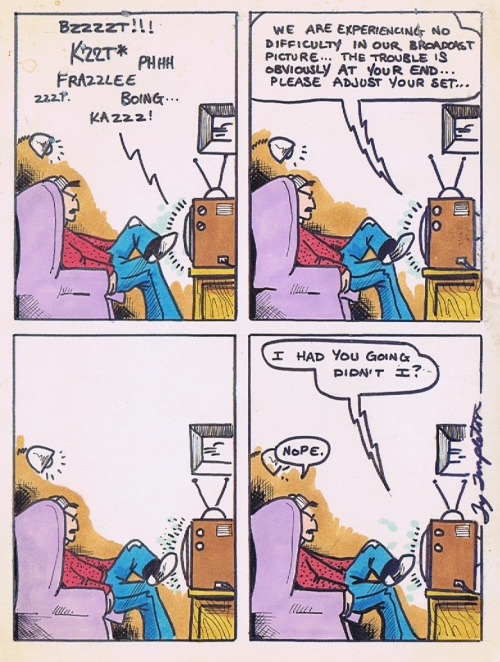 Comedy from back when I had hair on my head.

That’s it for today.  See you back here next week when I figure out a way to have Stavros and Lana escape from certain death, or I ignore it completely and start a new adventure on Venus.  It depends on how much spare time I have to write a GOOD script.  And don’t forget to visit me at PARADISE COMICS today for a free comic book, a free sketch, a free smile and a free curse in VODON-ESE.