MARTIN LANDAU IS MY FATHER AND SATAN IS HIS MASTER

My original father, Charles Templeton and tent preacher Billy Graham (and some other guy) pick up some lovely ladies for a night of worshipping God together back in the forties.

THE MOST ASTOUNDING, STRANGE, BUT TRUE  STORY OF MY LIFE.

I try to lead an odd life.  I have sought out bizarre places and unusual experiences, with social tastes that include Mennonites, strippers, TV celebrities, magicians, bisexual nudists, rock stars, and comic book artists…all are welcome at the Templeton home.

But it’s starting to get weird around here.

I just found out my father was actually Martin Landau ( the man in charge of the runaway Moon) and an agent of Satan.  And it’s somehow the fault of the beast-man from a Disney movie.

THAT’s the kind of weird I can enjoy.

Come to me, my child, for I am your father...your FAAAATHER! 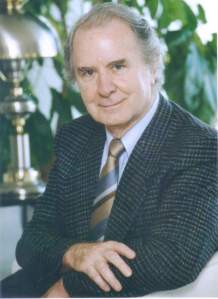 This used to be my dad. Before the recent revelations.

Charles Templeton (my original dad), was a professional cartoonist, journalist, inventor, politician and a fixture of Canadian television for decades.  He tossed off a bunch of best selling novels (one of which killed Elvis) and wrote the story for a crappy Bill Shatner movie that no one saw.  Dad was also one of the more important figures in 20th Century evangelism, who, along with his partner and friend, Billy Graham, built up the YOUTH FOR CHRIST ministry in the thirties and forties—until father got some book learnin’, lost his faith, and walked away from the God biz.  To make things worse, Dad more or less shuffled evangelism onto TV along the way, for which our family owes humanity an apology, and I give it freely and often.  SORRY, humanity.  Our bad.

Billy Graham is a very famous preacher (and not-as-famous anti-Semite, as the Nixon  tapes ably demonstrated).  Billy believes in God all the time.  He super-believes in God.  More than you do, trust me. 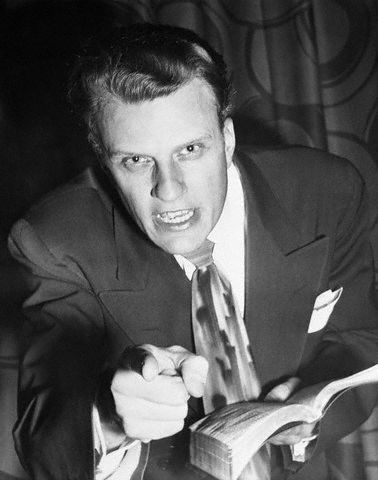 Look at me. This is my "believing in God" face!

Martin Landau (my new dad), is a talented actor, who was in Hitchcock’s NORTH BY NORTHWEST, played a screen vampire in ED WOOD, piloted a rogue moon in SPACE 1999, and killed bad guys while wearing a rubber mask on MISSION IMPOSSIBLE.  That’s all damn skippy-cool, and every one of you knows it. 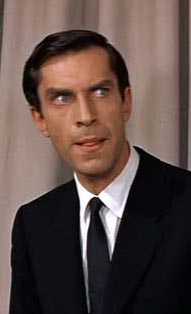 Robby Benson is an A-list cartoon voice, and a B-list actor turned C-list director.  Like most of Western civilization, I don’t think about Robby Benson unless the singing teapot is on my TV. 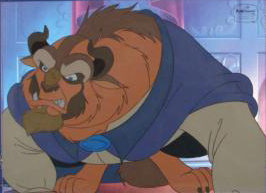 Robbie Benson in his best known screen performance as a drawing.

AND NOW, THE STRANGE BUT TRUE STORY

In 2008, cartoon lion-man Robby Benson, directed a film about the early years of Billy Graham. It’s supposed to be a true story.  Robby called it “BILLY: THE EARLY YEARS” because that’s the keen, inventive mind working inside the Benson skull hole. 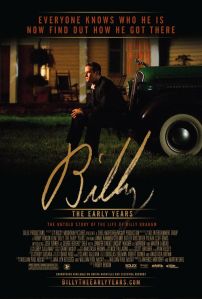 The poster of the Movie of the Century.

I first heard about this film last year when my brother, Brad Templeton,  sent me to the movie’s promotional website (here) and there was a clip with actor Kristoffer Polaha.

(from Mad Men) playing my father as a young evangelist.    I’m not fond enough of Billy Graham to sit through some two hour hand-job docu-nonsense, just to catch a scene where someone plays my dad, so I watched the YouTube clip and thought little more about it. 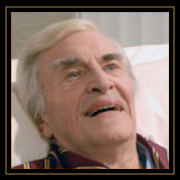 Dad on his death bed. Clearly having a pleasant time.

But my brother found a DVD copy of B:TEY (as the fans call it) last week and watched it.  He reports that Dad ain’t no cameo character in this here picture.  Instead, the story is told entirely from the point of view of my aged father (played by Martin Landau), opening up a floodgate of Templeton memories about young Preacher Billy, and their time together, in a deathbed interview that dad gave to some reporter, days before the end.  Pops tells the eager scoop-monger a golden age buddy picture tale, featuring two cocky church boys, fightin’ for Christ, with Billy the smiling, blonde hero, and my father an agent of Satan who works to tempt away Graham’s faith and destroy the church from within.

Yup.  An agent of Satan.

Say.... Wouldn't you rather do something evil?

I haven’t seen it yet but, according to my brother Brad, in the story, Dad tempts Billy.  He lies to God.  He fakes his way to the pulpit, more or less as an agent of the dark lord, and converts to Christianity with his fingers crossed behind his back, so it doesn’t count.

When I was a kid, and my father would spank me for setting the back yard on fire, I suspected he was an agent of Satan.  Now I have proof.

But I am confused.  See, my father suffered from Alzheimer’s in the last years of his life, and couldn’t tell his wife and kids from a well stuffed throw pillow, let alone give death bed interviews to anyone.   If  Dad was as likely to have a conversation with an oak tree as a reporter in those final weeks of his life, then the entire premise for this “true story” is invented bullshit, pulled directly from the asses of screenwriters WILLIAM PAUL McKAY and JANA LYN RUTLEDGE.

The screenwriters, in their best known photo.

William Paul McKay came to this film after a lifetime of no screenwriting credits whatsoever because one  doesn’t want one’s authors tainting up their vision with prior experience or a familiarity with “formula”.  And you can’t toss a rookie at the blank page without a well-seasoned old hand  like  co-author Jana Lyn Rutledge to guide them.  Jana  penned a single  episode of a Christian Children’s Show called CIRCLE SQUARE a mere thirty one years previous to this epic flick.

With these savvy show biz veterans at the helm, it didn’t matter if they didn’t research their subject, talk to his family, or discover that Dad had Alzheimer’s.  Those were “facts”, and with any film about religion, you can’t let irrefutable facts get in the way of a good yarn.    It turns out I’m not the only offspring of Jesus-Starsky or Christ-Hutch in this religious buddy road-trip that didn’t like this goofy flick.  Billy Graham’s son thinks the movie is crap, too.

How come I never worked on this series?

But it got made. It exists, and perhaps dozens of people have seen it.  And now I get to count Martin Landau as my father figure since the original model passed away– and I’m comforted to know I have a direct family connection to THE EVIL DARK LORD, should I need one.  Some Marvel Artists get to draw Son of Satan, but I get to live and breathe it, man!  Ladle some of that crazy sauce into your life, and see how it tastes.  I wonder if I went to Martin Landau’s house, would he’d let me sleep over?  Probably I should call first.

By the way, the actor who actually does look like my father, Harry Shearer refused to be involved in the project after watching a thirty-one year old episode of CIRCLE SQUARE which he described as “just awful, even in the CIRCLE SQUARE sub-culture”. 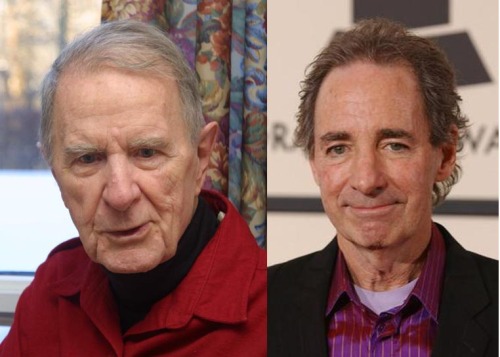 One of these is my father, and one is Harry Shearer, but I can't tell which is which.

Go here, to my brother’s blog and read his review of this Bullshit Billy film.  Later, I’m surfing for a copy to download illegally, as I don’t want to give these folks a dime to watch their monkey theater puppet show.