It’s HOVERBOY week! And no one can stop me!

We’re promoting Hoverboy awareness all week at Art Land, running a contest and informing the world of the greatness that was the Battlin’ Bucket, in anticipation of the release of the HOVERBOY RADIO SERIES we just found a complete set of, and yes, this is an unforgivable run-on sentence, what are you going to do about it, punk? 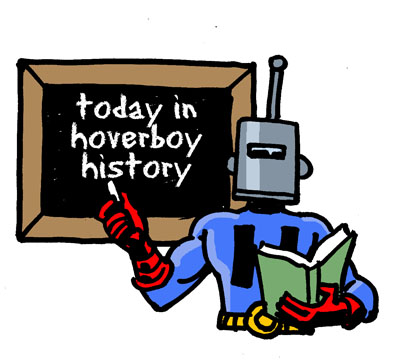 May-1918 • Hoverboy co-creator Charles Nutt’s father, Peter Nutt, is horribly wounded during the Battle Of Cantigny, the first major US offensive of the

Pvt. Peter Nutt, pictured before the battle. Trousers not shown.

First World War.  The elder Nutt had tried to stay out of the war; claiming heart attacks, blindness, medical cowardice, “secret negroism” and leprosy, none of which earned him the deferment he desired.   Peter spent the fall of 1917,  training with the 28th Infantry of America’s 1st Army Division, and staining a record one hundred and eleven pairs of government issued trousers with what officials described as “terror”.  In battle, Private 1st Class Nutt frequently could be found  with a bucket on his head, (over his helmet and gas mask), because, according to his diaries,  “…ya can’t be too careful, right?”.  And on the fateful day of May 27th, that’s how Private Nutt went over the top, charging towards the Hun blindly, and “screaming like a tiny Chinese woman” (also according to his diary).  When he was hit simultaneously by two artillery shells, it blew off both legs, both arms and almost all of his internal organs, leaving only his head, heart, lungs and genitalia unharmed.  This event was the source of the famous expression “a real bucket case” used in army hospitals to this day.  For years after the war, Nutt toured the Midwest Freak Circuit as “the Amazing Head”, where he met a young Cynthia Göring, and fell in love.  That marriage produced three children, including Charles and his twin sisters, Emily and Emily.

The Starks meet for the first time while the Circus tours Missouri. Cynthia is to the left. Peter is wearing his "performin' suit".

In 1929, the family opened the Nutt Hardware Store in North Bend Missouri, where a young Bob Stark was sent to purchase “something to hold some water” and the rest is history.

The moment of Nutt's debilitating injury was captured in the famous image by photographer Dan Williams, entitled "Our Honored Exploded".

1964 • First (and last) issue of HOVERBOY’S FOOD FUN MAGAZINE hits newsstands.  For collectors who own this hard to find item, answer to page seven’s “Vegetable Tumble” is RUTABAGA. 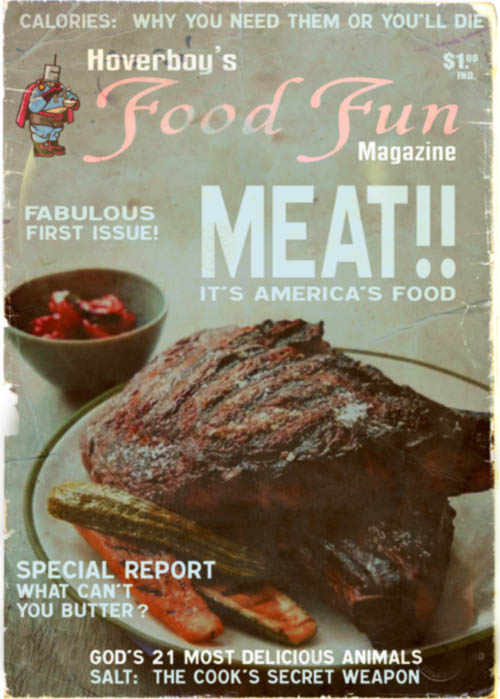 Caution: Do NOT attempt any of the recipes contained within.

1990 • Hoverboy Anime show “Lucky Hovering Float Boy American” airs in Japan.  Though partly financed by the Nutt estate, the show is never brought to US airwaves because the staccato animation style used during fight scenes caused seizures in forty-seven thousand Japanese children.  Though none of the children died, over nine thousand parents were killed trying to restrain them.

Sailor Hover-Girlaru. The only image from the series allowed to be shown in the USA by law.

Tune in tomorrow for a special HOVERBOY TOYS report.

And don’t forget:  THE HOVERBOY CONTEST!  Win an original piece of Hoverboy artwork by Ty Templeton just by joining the Hoverboy Facebook page, and naming your favorite villain from Vigilance Comics’ decades long history of publishing.  A winner (drawn by lottery by Hoverboy actress Sarah Samms) will receive an ASTOUNDINGLY accurate reproduction of the winning cover, with such line-by-line fidelity that you’d swear it was the original cover!  Be the envy of your friends.  Push around people smaller than you, and berate those with foreign accents, just like a real life citizen of Arizona!  Remember, few will enter, even fewer will win.  Void where prohibited.  Your mileage may vary.

2 responses to “It’s HOVERBOY week! And no one can stop me!”