WINNER OF THE HOVERBOY CONTEST!

It’s Hoverboy Friday! On Friday this week, too, so give yourselves a hand.  And today, the untold dozens of net-izens who entered our vastly successful HOVERBOY FAULTY MEMORIES CONTEST can let out those sighs of anticipation, as the big winner is about to be announced, complete with a copy of the original art for the cover he’ll be getting a stirring recreation of!

We asked for your Hoverboy memories about your favorite Super-Villain from the heyday of Vigilance Comics, in the Golden, Silver, Bronze and Cubic Zirconium ages of comics, and you responded with VIM and VIGOR, two of my least favorite villains of all time.  But you also responded with some great ones: 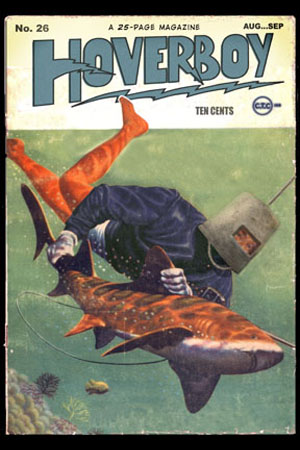 Hoverboy Vs. The Red Herring

This favorite was sent in by Richard Fader of Ft. Lee, New Jersey.  An issue  about misleading clues that eventually mean nothing. 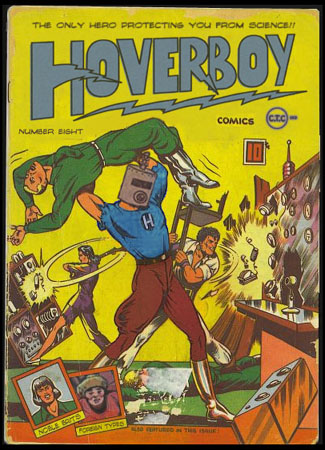 Hoverboy Vs. Science, Evolution, Book Learnin' and the Scary World

The above suggesting came from a “Sarah” from Alaska.  Science is a popular villain in parts of North America. 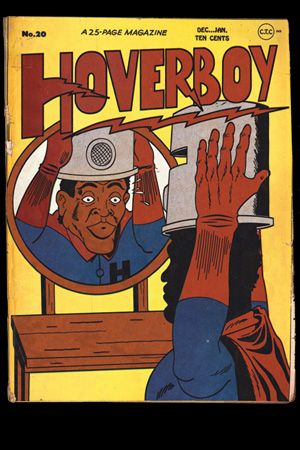 Hoverboy vs. Way Too Much Time in the Sun

Sent in by many different contestants who thought the man on the cover was a bad guy!  But it was Hoverboy himself, in disguise, silly readers, and Hoverboy’s ALWAYS the good guy, even in disguise.

Anyway, after the breakneck few weeks of the contest, it was all over on Monday.  And the administrator of the Hoverboy Facebook Fan Page took the many entries we had, and put them before our expert panel of Hoverboy Curators, who  narrowed it down to six finalists.  These six finalists were hand delivered to the home of Sarah Samms, the last surviving actress to portray Hovergirl on film, and she reached into the bucket and produced our winner.

But first the runner’s up, all tied for second place, which is also last place.  Take whichever standing allows you to hold your head high, guys.

Tied for last)  The one villain who could always get under Hoverboy’s Helmet, The Mop – submitted by Daria Scolia

Tied for last)  Jack Boot-Friggin’ Nazi and his Eternal Experitormentors – I think we all remember Jack Boot-Friggen’ Nazi, and he needs no further introduction –  submitted by Rob Pincombe

Tied for last)  The Enemy of us All:  Time – submitted by Dana Morsehead.

AND NOW, THE WINNING ENTRY:

Submitted by Ray Yelle (who submitted quite a few, proving that a stacked deck is a lucky deck!)

“The Procrastinator –  who technically remains undefeated by Hoverboy because he’s been rescheduling their final showdown for 14 years and counting. He gained his powers when a dying time-traveler gave him his damaged chrono-ring, allowing him to put off until tomorrow any event he’d rather not do today.”

GREAT MEMORY, Ray, and here’s the cover from HOVEROY #96, which featured the Procrastinator’s first “appearance” (though of course, he does not actually appear on panel for another three  years). 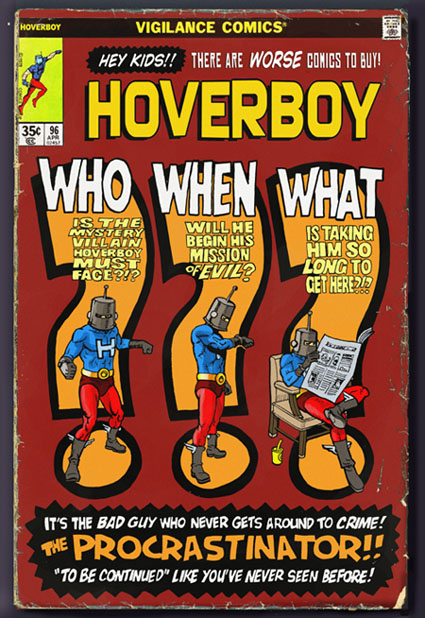 I would have had this cover scanned days ago, but I had things to do.

We’ll be getting in touch with Ray through the Facebook Fan Site, as well as announcing his winning entry there, and at hoverboy.com…and we’ll have to find out how to get him his stunningly accurate reproduction of this cover, hand drawn by me (Ty) on drawing board and everything.  It looks so much like the original, that you’ll swear the whole thing is a fake.

Thanks for joining us in this trip down Faulty Memory Lane.  And tune in next week for one of the most rare Hoverboy issues OF ALL TIME:  The first of the HOVERBOY WRITE YOUR OWN ADVENTURE issues!

To be able to enter future contests, join the Fan club over on Facebook:

3 responses to “WINNER OF THE HOVERBOY CONTEST!”