Well, I promised to blog more, and then I lose my internet connection for three days.  IRONIC!!

But I’m back now- and while I was out, I discovered a deliciously wonderful story that disproves F. Scott Fitzgerald’s contention that there are no second acts in American lives.

Follow me down a path of deviant reality, through the doors that bar the way to the future, and to the past.  Travel with me, my friends, around the canyons of B-Movie Hollywood, with our companions, the ghosts of Bela Lugosi,  Ed Wood and Criswell, and the far more recent corpse of Paul Marco.  Can you stand the secrets of history repeating itself from beyond the grave?  Is your fevered mind prepared for truth of…

Ed Wood in his "directin' clothes".

You’ve heard of Ed Wood Jr., the angora-wearing transvestite director of PLAN 9 FROM OUTER SPACE (considered the worst movie ever released).   What makes Plan 9 interesting (besides the incoherent plot, dialog, and acting) is former Dracula star, BELA LUGOSI, in his final film performance.

This photo was taken while Bela Lugosi was still alive.

Director Ed Wood gamely insisted on basing Plan 9 around some unused footage of the late Lugosi (originally shot for a movie called “The Ghoul Goes West”), by creating a story about grave robbing, and the undead, and

The chiropractor body-double, looking exactly like Bela Lugosi would look if Bela was hiding his face.

having a different actor play the undead version of Lugosi.  It might have worked, if the actor Wood hired (his wife’s chiropractor) hadn’t been six inches taller than Bela, and looked nothing like him.   The fruity aliens, cheap special effects and awful editing are part of the Plan 9 experience, but it’s the astoundingly bad body double for the late Lugosi that made this film a legend.  Keep that in mind as we continue.

I was under the weather last week, and ended up watching a bunch of Ed Wood movies in a row to pass the moaning time—and I noticed a character named KELTON THE COP (played by Paul Marco) appears in most of these movies as a minor character.

Marco looked young enough back then to still be alive today, so I decided I’d see if I could track him down through google, or Wiki or IMDB, and see what ever became of Ed Wood’s stock company actor.

Paul Marco in the 50s

Well, I was delighted to discover that Paul Marco was a guy who could MILK his fifteen minutes like a dairy farmer on crack…. Since the “rediscovery” of Wood’s films in the early 80s, this actor (that the Amazing Criswell once predicted would be “bigger than Brando”) continued playing KELTON THE COP to a dwindling audience of ironically sneering youth right up until he died at age 80, just a couple of years ago. 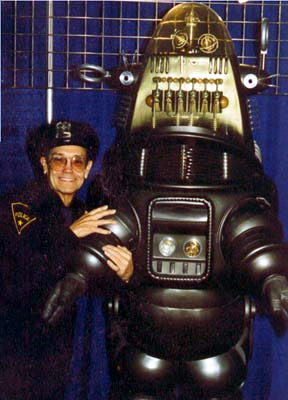 Robots cannot die, and neither can minor characters from astoundingly bad films

In the 80s, Marco put on the KELTON uniform and went to conventions to sign autographs.  He created the Paul Marco fan club in the 90s and served as president.   He went to midnight screenings of PLAN 9 as a celebrity host.  He put out a “KELTON THE COP” 45 rpm single in 1995 (long after the world had stopped buying vinyl).  He played Kelton the cop in a 2005 movie called “THE NAKED MONSTER”. He would host video store promotions, actor’s re-unions, mall openings, kid’s parties, ANYTHING to keep this character from the worst-movies-ever-made, alive.

The return of Kelton to the big screen.

And in 2006, when underground filmmakers CENTER PRODUCTIONS approached Marco to star in “KELTON’S DARK CORNER” – a 12 part series of four minute, micro-budget noir stories released exclusively through RUSSIAN MYSPACE– Marco agreed.  How could he not?

Unfortunately, he passed away after only recording four of them, and that’s where this feel-good story kicks into high gear with a double rainbow ending.

When they realized their star was dead, the producers of the Dark Corner  CONTINUED the series, with a solution that was inspired by the life and art of the great ED WOOD, himself.  To carry on, they decided Kelton’s character had to die, and be transformed into an undead female character named KELTONOVA!

AHHH! AHHH! The transexual undeadness of it all!

Sometimes the world is more gloriously perfect that anyone could imagine. Here’s a link to the final episode of “THE DARK CORNER” featuring the original Kelton.  I THINK it’s the worst film ever released on Russian Myspace, but I’ve only seen a few dozen of them, and can’t really judge. 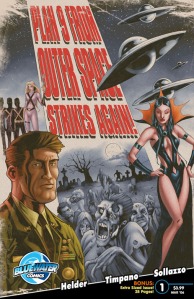 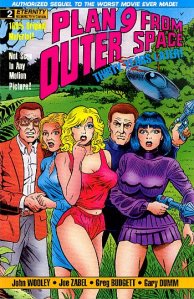 11 responses to “SOMETIMES THE WORST THINGS TURN OUT JUST PERFECT!”