So I’ve been offline for more than a week, half because I’ve been swamped with work, and half because my computer had a minor problem with the inner workings and had to be repaired.  BAD electronics!  Bad!

I think it's fixed now, but no sudden moves...

While I was away, the magnificent Marcus Moore and the gang at HOVERBOY ARCHIVES has put up the next THRILLING installment of Hoverboy’s olde tyme radio show.

Of course, these old shows are very close to my heart as they were written and produced by my grandfather, and the grandparents of many of my friends.  This episode features the grandfather of my pal, 70s rock star BOB SEGARINI, as well as the grandfather of my son TAYLOR, who performed in the commercial segment as the deeply confused boy, “BILLY”.  It’s a seminal role in my son’s grandfather’s career, as he was only 13 at the time it was recorded.  And of course, the episodes continue to feature the grandparents of Steve (Ed the Sock) Kerzner and Liana K,  Rick Green (from History Bites, Red Green Show, The Frantics) and Rob Pincombe (from Kid vs. Kat)

We’ve also found more of those exciting HOVERBOY vs. ROBOT HITLER daily strips, and scanned ’em for your enjoyment up at the Hoverboy Museum! 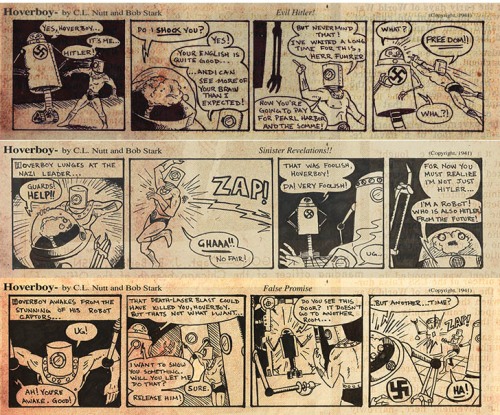 Even with all this FLOOD of new Hoverboy material that we’re bringing you today,  I’m at work on a cool, secret Batman-related project that’s going to own me for the next few weeks or so and will be out next year.

But now that my computer is back, I’ll be hanging around here a little more regular-like.

Oh, and the next issue of Mad Magazine has some work in it that I did.  Go buy that when it’s out on December 22, 2010….like you just bought the Northern Guard and Strange Tales issues that came out yesterday….RIGHT?  You can see a preview page I did from the MAD DUMBEST 20 MOMENTS from 2010 issue HERE.

But first…go listen to the latest installment of the Hoverboy radio show.  It’s funny, I promise.

Seriously? This is a real comic?