Nuff Said.  Face Front.  Have Faith.  We are the members of the Merrie Marvel Marching Society.

Here now, your Stan Lee Moment of the Day:

I think this is a Paul Shaffer doll with a painted-on mustache.

Little known fact:  Stan Lee is the only comic creator to have his own action figure other than Ernie Bushmiller, creator of Nancy. 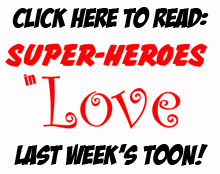 19 responses to “What If Stan Lee Bun Toons! YAY!”