Unseen Batman Animated Art. But NOT from Batman Adventures!

Zounds!  Can it be true?  Did I work on more than ONE incarnation of Animated Batman?

Yup.  I’ve worked on a few different animated Batmans. Long before there was Batman the Animated Series, there was the cartoon Batman commercials I did for Zellers Department stores back in the 80s.

As regular readers of this blog might know, I drew practically every frame of this commercial (and a few others), except the last few seconds with Penguin fighting off the words at the end.  Killing Joke had recently come out, and I had a Brian Bolland thing in my head (which is why Bats looks like that), mixed with my Mad Magazine/Kurtzman/Elder style at the time (which is why all the characters overact like that) ..but this isn’t what I’m talking about… I’m talking about this:

When the new, animated Brave and the Bold DC series started up a while back , I wanted in, and called up DC to practically BEG them to let me draw an issue of the tie-in comic book.  I’m a bit of an animated Batman fan, you know…

and the fine folks at DC comics were kind enough to let me twist arms, threaten family members and offer to do it for free if need be.  So I got a script for an issue and started plugging away…

It was a fun tale, with damn near every guest star you could think of:  Aquaman, Green Arrow, Guy Gardner, Plastic Man, Animal Man, and a PILE of others!

…including some delightful surprise guest stars who have never been on the TV version of the show, so I had the wonderful fun of getting to design them in the new style.

I won’t tell you who the guest stars are, or show you my designs quite yet…because DC never printed this story, and in theory still MIGHT some day, and I don’t want to put out any spoilers or give away the ending.  But it’s been a couple of years since I drew this issue, and when I asked about it at the office recently, I was told they had no record of the story being drawn, or even existing….and with the new re-launch of everything DC coming up, I’m starting to believe it will never see the light of day anywhere but here.

I’m a little disappointed in that outcome, as it was a full 22 pager which I penciled and inked, and it got lost in the office shuffle somehow.    Crossed fingers, and good behavior might eventually lead to it being published, but I’m currently in a not-holding-my-breath mode, so at least I get to show off some of it here.  At least the not-ruining-the-story pages.

There’s MORE non-Dini-Verse animated Batman lying all over the house, including pages I did for the Super-Friends series like this one:

Can you figure out the awful puns that adorn this page? I'll give you a hint: The first one is "butterfly".

There’s a few of these puzzle pages, penciled, inked, lettered and coloured by me, which was a rare treat, as I usually don’t get to do that.  At least the Superfriends stuff got published, but I’ll bet none of you ever saw it.

That’s the nature of the job.  I’m just a dancer and DC calls the tune, my friend.   But at Art Land, it all eventually gets shown off.

Stay tuned for more B&B pages in the near future, more puzzle pages, and some of my super-secret animated Justice League pages from before there WAS a Justice League Adventures.  Written by Roger Stern, penciled by Me the Guy, and inked by Burchett, in a story never published in a DC comic!

Who says this isn’t the Batmanimated Age of Blogging?

Here now, your BONUS Batman Brave and the Bold moment: 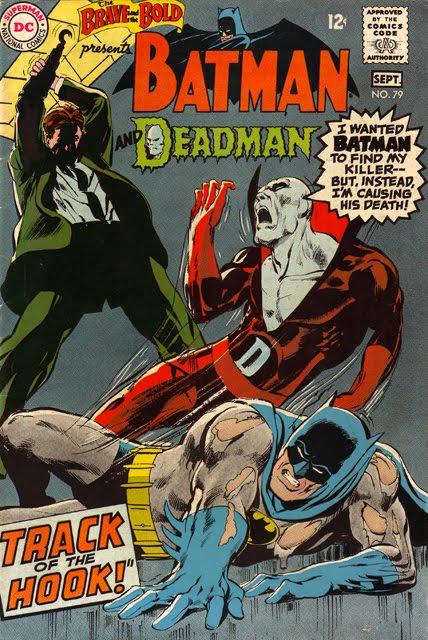 My first ever Deadman comic purchased by my older brother, and still in my collection...not a bad place to meet the character, eh?

This entry was posted in Unseen artwork and tagged Batman, Brave and the Bold, Deadman, Neal Adams, Superfriends. Bookmark the permalink.

6 responses to “Unseen Batman Animated Art. But NOT from Batman Adventures!”