I try to keep up with the new releases from Marvel, DC, IDW, Dark Horse.  But every now and then, I get surprised by an advertisement for the next big project…

Now, it’s always a good thing to aim for diversity in your characters, and to reach out to communities not well served by the biz in general.  And with the Mandarin starring in the next BIG BLOCKBUSTER from Marvel, these sort of characters are always POSSIBLE for a re-vamp.

Please, turn out well.  I like DC Comics and want good things for them.

And I’m waiting for the YELLOW CLAW to come back.

TY the GUY OUT!

For those too young to remember, VIBE was the oft-maligned Latino super-hero from Justice League Detroit, who spray painted things, break danced, threatened people who talked to his sister, and spoke in such broken English you had to say his dialog out loud.  He was killed off fairly quickly after his arrival. 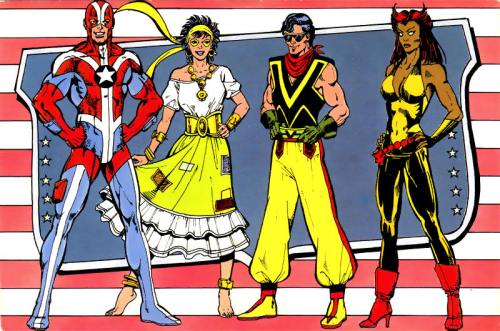 Included in this image: Other characters that never became popular

The new DC Comic “Justice League of America’s VIBE” is due out in a matter of weeks.  The art looks good…

Vibe has shown up in a few animated episodes without causing trouble, but in the comics…?  Not so much.

A couple of years back, onceuponageek.com created a phoney VIBE comic as an April Fool’s Joke.   But that was way back in 2009 –  a different world, when that sort of idea was funny.

Of course, with OTHER super-heroes, VIBE has been a very popular magazine for years…

R Kelly   counts as a super-hero because he believes he can fly.

To visit the Bun Toons archive, click the vibrating rabbit above.

17 responses to “Hoping for the Best Bun Toons! YAY!”