Lesson one:  Put on a bullet proof vest.

The big event is coming –

-and I do NOT mean the Superbowl, which I understand is some time this weekend.

I’m talking about Deadpool (the “regenerating degenerate”, the “merc with a mouth” and Marvel’s most popular non-clawed mutant) and his movie premiere.

To those of us in the funnybook biz, Wade Wilson is well known…but outside of the eight people who stayed awake for his last big screen appearance, Deadpool is an unknown, a mystery, a cipher wrapped in an enigma.

That’s why the Bun Toon is here:

I’ll see you guys on opening day.  Except for you kiddies…this one’s not for YOU.

I’ve done my little part to keep Deadpool from being TOO successful.  Here’s a page I drew from DEADPOOL #250 (death of Deadpool special) last year. 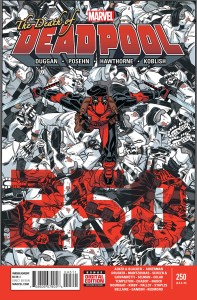 this is the cover, if you can’t live without the issue.  It’s actually a really fun special!

If you’re in the Toronto area on Sunday, come to our COMIC BOOK BOOTCAMP OPEN HOUSE from 1 t0 6 pm!  If you’re a former bootcamper working on a project, BRING YOUR LATEST WORK, or if you’re a curious stranger, come on in and learn to ignore the football game!  And don’t forget to click on the logo to check out the next set of upcoming classes!

Lesson one:  Put on a bullet proof vest.