Another one bites the Bun Toon.

I have no muzzle, but I must scream.

There was a quote on that Harlan poster:  “I am a blatant elitist.  Five or ten percent of the population move society forward and the rest are drones.  Anyone who can’t see that is a damned fool.”

Harlan was a pissed off young man, then an angry middle aged man, and probably an ornery old man.  He was also an astounding writer, and a major inspiration to me in my career and life.

I think I was dickish to him as a way of joining in his merry dance of aggressive energy and constant scorn.  But instead of spotting a kindred soul, he simply didn’t much like me.

But I loved him like crazy.  And I take back all the dickishness.

There’s so, so many great Harlan short stories and screenplays.  Of course there’s CITY ON THE EDGE OF FOREVER, and there’s REPENT HARLEQUIN, SAID THE TICK-TOCK MAN, and there’s DEMON WITH A GLASS HAND, and SOLDIER, and every single essay he wrote for Fantasy and Science Fiction Magazine.

But if I had to bring it down to one story, it’s JEFTY IS FIVE.  This is a heartwrenching fantasy story that I’ve only ever found in one place:  This issue of F&SF–

I can’t exactly tell you guys to run out and get a copy of a forty year old magazine, long out of print.

But run out and get a copy of something.  Star Trek, the Outer Limits, hell, even BOY and his DOG.  Something with Harlan’s name on it that he didn’t sue the publisher or producer.  (He did that a lot…but he was always right.)

I have a pile of Ellison books on my shelf I recently found in a used bookstore, and since I’ve known Harlan was ill, I’ve avoided reading them, as I didn’t want to be in the middle of one when he passed away. 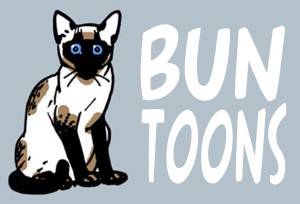 For the last Bun Toon, another tribute to a lost legend, click the cat above.

7 responses to “Another one bites the Bun Toon.”