Hop, hop and away!

I promise, no complaining about the new Zack Snyder movie, except for this bit here.

Another honest-to-god-true-life-adventure.  Ah, the life I lead…

I suppose my other children are pretty cool, too.  No, really.

As long time readers of this blog might recall, my eldest son, Kellam once went out on Halloween as BLUE SUPERMAN!

Perhaps the only Blue Superman ever on Halloween.  Not a single house knew who he was.

Below is a conversation I had with Taylor about the Archie characters.  It’s an ongoing education with my brood.

And, of course, me and the lad aren’t the only ones with a Christopher Reeve man-crush.

Jerry Seinfeld’s man-crush on the big blue boy scout is so strong, a few years back, American Express actually hired me to draw Superman and Jerry palling around together.  No, really. 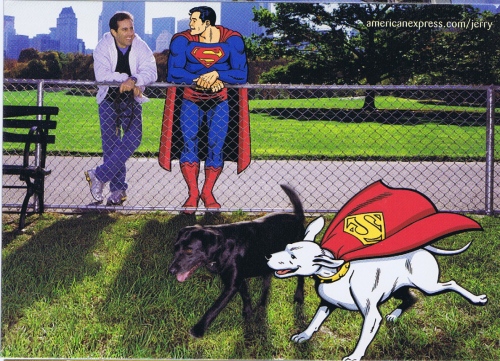 I think Superman is tickling Jerry here.  What was I thinking when I drew this?

If you life in the Toronto area and are interested in learning to write or draw comics, click here.

Guardians of the Bun Toons! YAY!

Jumping for Joy in Zero Gravity

The hype has been unrelenting.  There is no escape.  By now, everyone on Earth has seen at least a commercial or two…

But is it worth it?

I could go into details, and tell you bits and pieces that worked and didn’t work.  But none of that really matters.  The movie kicks major ass.

I may even see it again….despite having all the issues of the original run of the Guardians and being one of those old fans who gets cranky when they get the costumes wrong…

Yes, they really looked like this in their first issue.  And they WEREN’T a big hit, you say?!?

So, I saw the Man of Steel yesterday with my 13 year old son.

And I asked him, as we were walking out of the theatre, “What did you think?  Did you like it?”

That’s kind of my reaction…(Slight spoilers ahead)

The cast (except for Amy Adams, who is preposterously mis-cast as Lois Lane) is uniformly great.  The direction is fantastic, the special effects magnificent.  The battle sequences are the most spectacular super-fights ever put to film.  Better, even, than the Avengers.

But it’s all in service of a movie that is geared to make you think Superman is a hateful, selfish, homicidal dick.  The last scene of the movie is Superman needlessly destroying expensive government property, just to be an asshole about it to an American general.

(BIG SPOILER: move the cursor over the text:  The bad guys are defeated by human beings, Superman is just there to destroy Metropolis).

Other than THAT, it’s a good movie.  Like THE DAY THE EARTH STOOD STILL meets GODZILLA….only Superman is both Gort and Godzilla in that scenario.

Your BONUS moment involves the story of how I got the pants.

for the Bun Toon archive, which features many Superman related posts, click here

So, it sounds like all the people who haven’t already seen Man of Steel are gearing up to see it tonight or tomorrow. I’ve seen LOTS of comments from people I know–and I’m impressed that the opinions are completely divided. People either hate it with a fiery passion or they’ve already bought tickets to see it for a third time.

DON’T tell me any spoilers, and plot points or…well, anything, as I’m planning to see it tomorrow with my youngest son. I’ve heard it’s a “Superman for our times” or “a Superman movie for people who weren’t Superman fans.”  Until I get to see it and have my own opinions, I thought I’d post some research material showing what I know about the character of Superman up until today, courtesy of past Bun Toons.

First up, the man himself:

And the woman herself:

And lastly, I made my own predictions as to how the summer’s box office would go–we’ll see in a couple of days how right I was:

My kids have always been superhero fans and showed it at an early age.

and, much like their dad, they didn’t always worry about whether they liked the guy everyone else liked:

Kellam in Blueface. Hallowe’en 1999, with Bunny Taylor and TyBunny

And your Bonus bonus moment:

Click HERE to go to “Superman vs. Jesus vs. Halloween”

The webcomic is free, but we make our money on the popcorn and soda

Hollywood relies on the summer blockbuster as an integral part of their fiscal year.  Without the hundreds of millions worth of income the summer brings the studios, there would be no money left for the budgets of next year’s miserable bombs.  So if you want any more Green Lanterns or John Carters to be made, you have to see this year’s crap to give them the liquidity.

But for those who just want to watch the cream of the crop, don’t worry, I’ve reviewed EVERY summer comic book movie, before any of them have come out.  How can I do it?

I have mystic powers…

I know all…I see all…if only Hollywood came to me first, we could save everyone a lot of trouble.

When it comes to Comic Book based movies, there is only ONE possible bonus moment:

If one considers the high quality talent associated with this film, it’s almost against the laws of physics that this film is so, so, so genuinely awful.

For last week’s Lois Lane at 75 Bun Toon, click the fun lettering above

For the Bun Toon archive, please click the bunny with the bun

Spoilers ahead, and I don’t mean Stephanie Brown.  Though she would have been cool….

Please, if you enjoyed this movie, don’t send me hate mail.  You’ll never change my mind.

Art and story by my friend Rob Walton. It’s better than Dark Knight Rises. Except for the Catwoman bits.

For last week’s somber and not-at-all-funny Bun Toons, respectfully click the Bunny above.

For every Bun Toon ever, click the much less dour rabbit above.

I’ve been so busy making Spider-Man comics for the last couple of days that I  didn’t get a chance to see the latest Marvel Blockbuster until yesterday.  Overall, I liked it, but I still found at least…

SPOILERS IN CASE YOU HAVEN’T SEEN THE AVENGERS MOVIE YET:

I wished Hawkeye had been written a little better, and I think Captain America didn’t have much useful to do in the final battle, and Loki wasn’t as strong here as he was in the Thor movie, but the great stuff with Black Widow and the terrific scenes with team all together, more than made up for the shortcomings.  Avengers isn’t the BEST Marvel movie (that’s still Iron Man), but it’s a really fun ride for your buck.

My favourite Avengers cover I ever got to draw. It featured Devil Dinosaur and the phrase “Dino-FIghting Action”, which is all this young cartoonist could wish for.

My second favourite…mostly because I got to write “Evil scientists stole my love” on the bottom left. I have a “thing” for cover blurbs.

For every Bun Toon ever, click the adorable rabbit above.

Please turn off all cell phones and refrain from talking to your neighbour when reading the cartoons, thank you.

With X-MEN FIRST CLASS, GREEN LANTERN, THOR, CAPTAIN AMERICA and CONAN already running through the theaters this summer, and AVENGERS, BATMAN, SUPERMAN, and TINTIN all on the way, it seems like Hollywood is burning through the comic book properties as fast as they can build sets and hire directors.  After Flash, Aquaman and Namor are finished, they’ll essentially be out of super-heroes to exploit.  But don’t worry, I’ve got connections in the biz, and I know some of the less publicized projects that are currently in pre-production, heading our way next year.  I’ve even done storyboards for one of them (but I’m not allowed to reveal which, thanks to an iron-clad NDA).

But thanks to my sources, I can pre-preview a couple of upcoming films that are in the pipeline that comic fans are going to love.  I know it seems impossible, but I swear, every one of these movies has been scripted, cast, and  is up and shooting right now.  The posters are all going to be in local theaters by December, but you guys get an exclusive here at my blog.

We’re NEVER going to run out of characters to film.

Personally, I’m looking forward to the Yellow Kid.  I love Spike’s work.  And is it just me, or does that look like George Wendt as Bouncing Boy?  He’s a little too old to be called “Boy” at this point.  (Not that Cruise is still a “lad” but he keeps his baby-face good looks as the years go by…)

Apparently there was a Dazzler movie out in the Eighties. Does anyone know if the new one is a remake or a sequel?

For Every Bun Toons Ever, click the manly bunny above. Serious film offers will be considered.