I haven’t been home for a couple of weeks, gallivanting about the globe — like the superstar  that I am — to Denver and Montreal for comic conventions.  I wasn’t home to Bun Toon, and I missed a couple.  I abjectly beg you to accept my apologies.

Since I was last a rabbit, I’ve had an adult son move out of my house, a dog move into my house, my country had a major birthday, this webcomic got nominated for a Shuster award, and I heard something about a Russian political scandal somewhere.

So much important stuff to talk about.

So I went with this.

My wife and I saw this Waldo guy a couple of times during the convention weekend.  He was always muttering angrily to himself, and appeared lost the entire time.

THAT’S how you do it, people.  Think BELOW the surface to make your cosplay great.

At the same convention in Denver that weekend, I saw THE cosplay of the month. 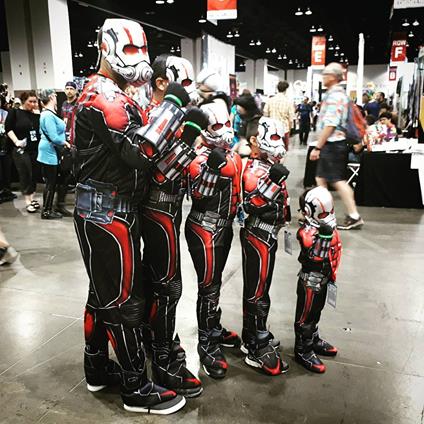 For the last BUN TOON, our giant summer crossover, click above

Every Bunny But Me Bun Toons! YAY!

I was at a fairly large comic convention last week in Montreal, where I had a great time, and watched poor Arthur Suydam get molested by the internet for something he didn’t actually do.   (Ah, mob mentalities, where we would we be without you?)

But this weekend, I’m NOT at the big convention…and all of you ARE.

Have a happy Comicon, San Diego Peeples.  Kiss Batman for me.  I’ll be here in line for Ant-Man and all the Happy Meal toys when you get back.

Your Bonus Bits are some Convention Stories from Bun Toons Past.  Who says this isn’t the Rabbit Age of Comics?

Who says?  I need names.

And that’s the REAL reason why it’s best not to go out in public.  The potential for humiliation is always looming.  ALWAYS.

For the last Bun Toon before convention season, click here.

to see some of the sketch covers I did at Montreal last weekend, click here.

For the Bun Toon archives, click the delightful rabbit above.

Ah, the silver medal.  As Jerry Seinfeld once said, “Of all the losers, they came in first”.

The loser’s winner this year is another Superman related entry on the Bun Toon countdown…or at least a Kal-el related entry, because I’m not sure I ever saw Superman in this story.

But an alien named Kal-el?  Sure…

(Spoilers for the MAN OF STEEL MOVIE coming up).

I confused people with this review, as I’m still approached by folks who think I hated the movie.  I didn’t hate the movie, I actually rather liked it.  I thought it was an excellent alien-first-contact movie with a race of super-powered monsters…(Kal-el being one of ’em).   I can’t wait for the sequel where Batman and Wonder Woman try to beat the hell out of the alien menace flying around Earth named “Superman”.  I’d be scared poopless of this xeno-disaster and I’ll be rooting for Bat-Fleck to take him down.

None of that means I didn’t like the movie.  It’s just not a Superman movie.

During the San Diego Comic Convention weekend, I published a Bingo card for convention attendees to fill out.  The winner won something, I don’t recall what…because no one played.  So no one won.

I’m taking my game and going back home. 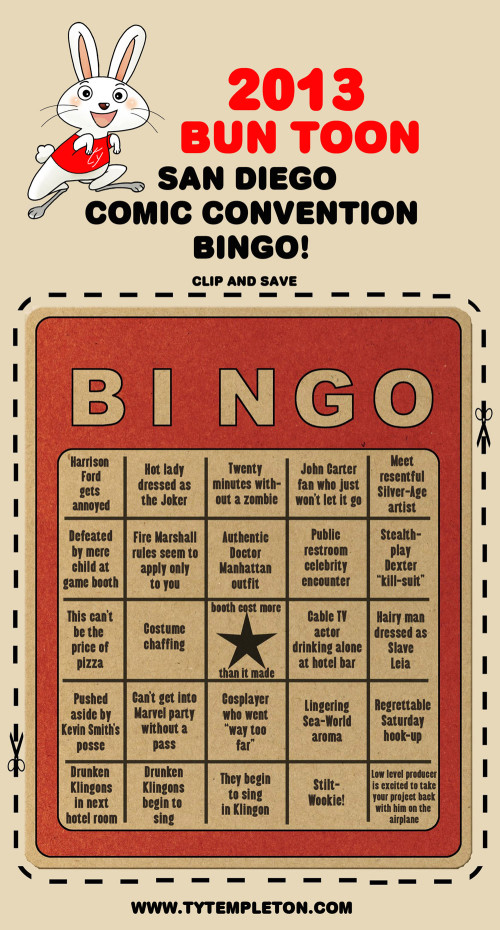 We had thousands of cards printed up and distributed through FedEx.  It cost us tens of thousands of dollars.  We had to take a second mortgage on the house, and now I greatly regret it.  The prize would have bankrupted me, though.  I think it was a new car, so there’s that, I suppose.

Since it’s my countdown, and we’ve already done the second best and the second worst, I’m tossing in a BONUS Bun Toon:  This was a follow up to the MAN OF STEEL review a couple of weekends later.  I figured since Man of Steel made mad bank, there would be imitators.

In truth, I just wanted to reprint that horrifying Lucy-pulls-the-football panel again.  I love showing off that I could have drawn the Peanuts strip for the last five years and no one would have known, well except for all the blood.

My son likes that I made the dad on Family Circus say a doody-word.

Finally, something on the internet based on a card game old ladies like to play!

Everyone who is ANYONE is in San Diego this weekend, except those of us who are behind on a deadline for an editor who stayed behind at the office and actually phoned us on Friday and told us to get our layout pages done by Monday or he’d grind our bones into bread.

So, for those of you out there on the West Coast, enjoying the sun, sea air and long lines at the meet-and-greets, here’s your playing card.   I know it’s two days late, but you still have to document your squares carefully, as there will be valuable prizes, and I don’t want fights with the judges.

(Click on the image and it will get larger)

To be fair, it will be hard to document the twenty-minutes-without-a-zombie square, mostly because it will never happen.  I suppose a constantly running surveillance camera might convince me, but it would have to have a pretty wide sweep of the room.

Happy Conventioning Comics People!  I’m with you in spirit!

(I swear, the pages will be done by Monday!)

For you Bonus Moments:  I give you a few of the Bingo squares…but you have to document your own.

Under the G: Stilt Wookie!

Under the “O” …hairy man-slave Leia! 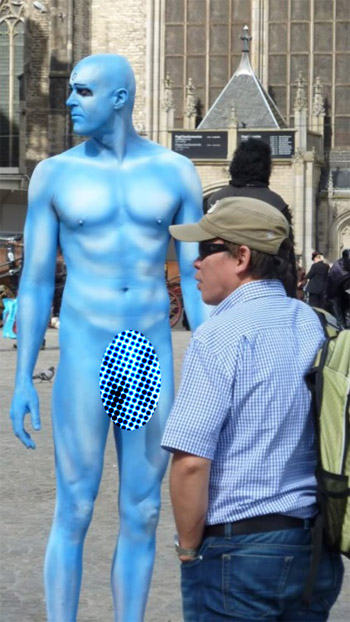 This is my buddy David Ross in San Diego yesterday…click on the image to go see the i09 article!

For last week’s Bun Toon, related to The San Diego Convention in a fairly direct way, click on John Lennon or Richard Pryor

for the Bun Toon archive, which include many Comic Convention related stories, click the bunny above

Again? I did one of these yesterday?

It’s up there as a link to yesterday.  Read that and then come back and read this:

Enhanced Honesty Plus.  It’s not just for American Media any more. 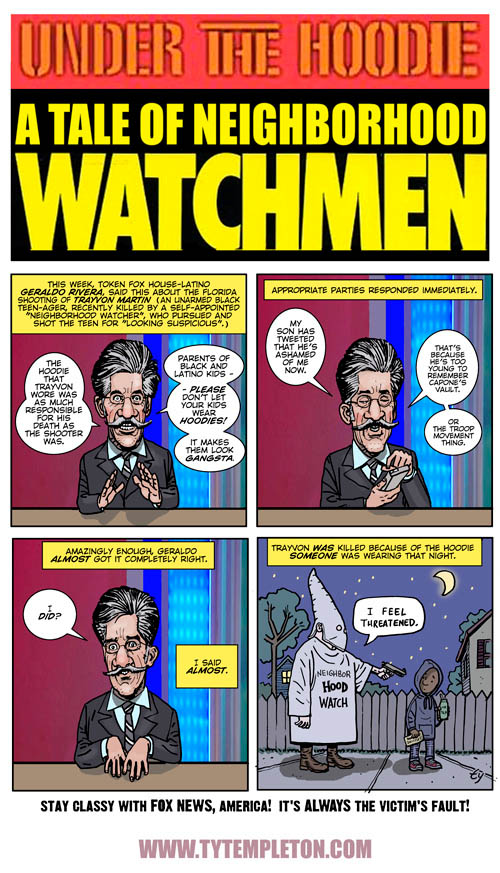 For the Archive (Yes, it needs updating!) click here.

This weekend’s Bun Toon is a sequel of sorts, and more or less requires that you fine fellows and gals read this ol’ adventure first, then come back tomorrow for the mind-numbing part two.

I’ll see you all here back tomorrow for the SHOCKING sequel to this adventure.

Bonus moment?  You want a Bonus Moment?  This entire POST is the bonus moment.  You get your Bun Toon tomorrow, you ravenous animals!

I’m not at San Diego this weekend, even though the rest of the planet seems to be.  Instead, I’ve taken to my bed in Toronto, recovering from some fairly work-intensive weeks with a bout of nasty exhaustion.  (Sorry there wasn’t a BUN TOON yesterday, the flesh is weak.)

But the MIND never stops at Bun Toons Central.  So I’ve let you into the creaky memory storage unit today.  Remember, you cannot open any boxes, and you cannot touch any items.  Whoever has the most money in their pockets can surely own it.  Yuuuup!

I hope those that made it to the West Coast are having a good time.  You’re in my thoughts when I’m not sleeping the day away…because those sleepy thoughts are always about bowling in the nude.

Time to play ARMCHAIR KIRBY! Votes will be tabulated with the latest software and reported back in a timely manner.

For last week’s Bun Toon, featuring another comic book legend, and my important relationship with him, click the black and white bunny above.

For Every Bun Toon Ever, click the colourful bunny above.