I’m dropping in for a moment to share a couple more fun moments of Trekkieness here at the Bunny Factory.

First up, a sketch cover I did at the convention this weekend.  A fan got a Shatner signature on a blank Star Trek cover, and asked me to fill in the space above it with a portrait of Kirk and his ship above.  I get asked to do likenesses a lot in my work a lot (Mad Magazine, Batman 66, Dexter, Star Trek) but it’s never as easy to a good likeness sitting at a convention floor working from a little phone-google image of the celeb.  Fortunately, the fan brought with him a nice big shot of Shatner’s handsome mug, and it turned out okay. 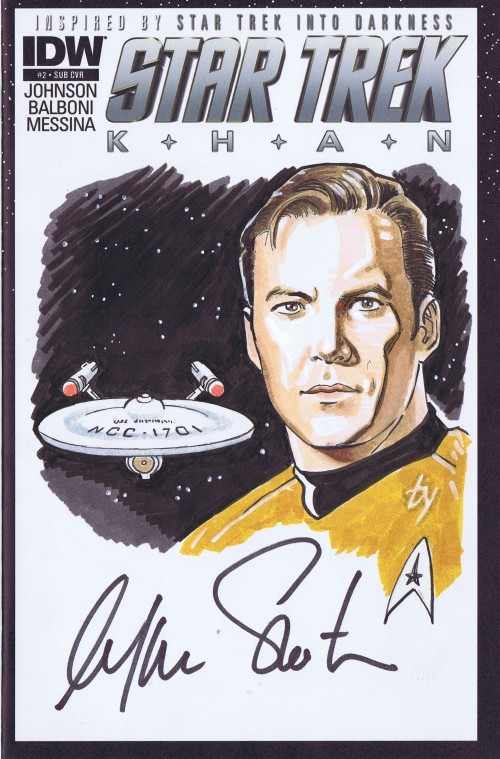 Second:  We sold a few copies of David Gerrold’s TROUBLE WITH TRIBBLES book, (the one with the all-new Tybunny cover art) at the convention….but we only had the softcover version at our table, and no one got to see the FULL wraparound cover that included Koloth bathing in the vile, barking, headless rats (his words, not mine).  Well, since I drew six zillion tribbles, and my devoted wife coloured six zillion tribbles, you have to see them all six zillion tribbles.

And it’s nice to announce that my latest Star Trek-adjacent project (with oft mentioned Trek Legend David Gerrold), “OH THE PLACES YOU’LL BOLDLY GO”  is gangbustering its way around Kickstarter.

But like all things Kickstarter-y, we need  your help to feed the beast (and yes, I’m referring to my teenage children).  If you’re hoping to see the love child of a Grinch and a Horta, or ever wondered how Thing One and Thing Two would deal with the Prime Directive, this is the book for you.

Check out the details HERE.

I’m drawing a cover that features the Bat-Eared Fellow this week, and promoting my Star Trek project, so of course the Bonus Moment is…

And so begins the end… Last Day! Today will run 10am to 5pm and it will be BUSY! I’ve got a few things scheduled and it’s my last chance to scour all the dollar bins and make sure I haven’t missed anything magical.

At 1:00pm, I will be part of GrokSpock, a live reading of Star Trek:  Wrath of Khan. We have our usual GrokSpock crew with a surprise guest:  actor/screenwriter/voice actor David Hayter (my kid who goes by the nickname “Snake” for his standup gigs, is very excited about this!). Will post the room number as soon as I find it…

At 2:15, I will run to Room 715 for COMIC BOOK BOOTCAMP:  How to write a story someone will want to read. (If you can’t make the workshop or would like to take my entire course  called HOW TO WRITE COMICS, there are still a few spaces open. Info is HERE.)

Then, I’m back to P57. Come find me there…  Keiren will be keeping my sketch list, and selling my sketchcovers and copies of The World of Star Trek and The Trouble with Tribbles, both by David Gerrold with covers by me.

In honour of today’s GrokSpock reading, a memory of the very first one we did:

And, of course…don’t forget the Kickstarter for Oh, The Places You’ll Boldy Go! Click on the Enterprise-like ship to go to the link: