The Metaphor Goes Up, Up, and Awry!

It occurs to me this might sound like behind the scenes, Superman is a real sausage party.  Nothing of the sort.  Get your mind out of the sausage gutter.

Someday, I’ll share you with you, how I became an “brother of the Fraternity of the Sausage” with Neal Adams and Scott Hampton, both of whom have contributed their own links to the wonder of Superman.

It happened in Paris, many years ago.

I’m still haunted by it. 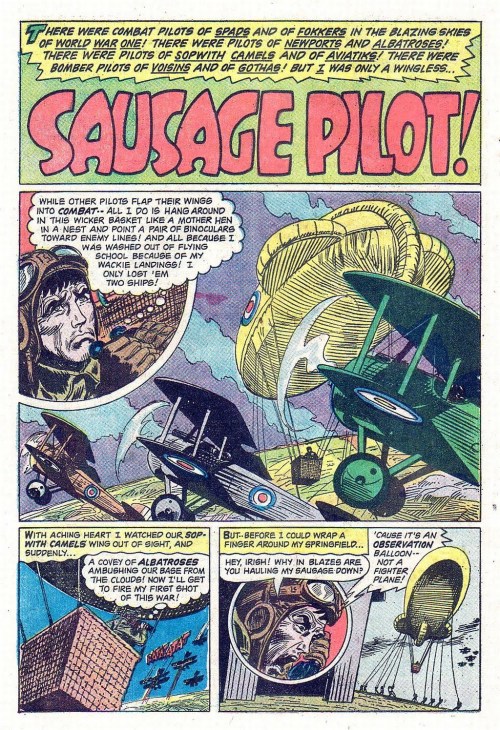 I have a lovely essay that I wrote on the occasion of Superman’s 70th Birthday, and rather than rethink it, I’ll just link to it below.  Click on the image and you’ll be taken to a much larger and readable version of the article.   When you’re done (or once you’ve ignored the article and scrolled below it), you can rejoin the regular blog, still in progress.

What I said still holds true (unless the upcoming movie REALLY sucks).

I’ve had a long and unexpected association with Superman through the years, and I consider it quite an honour to have contributed to the great character’s legacy. Working out of the Superman office in the late 80s and early 90s gave me the whooping-giggle thrill of collaborating with some of the legends of this comics industry.  I got ink over such childhood heroes as Jim Mooney: 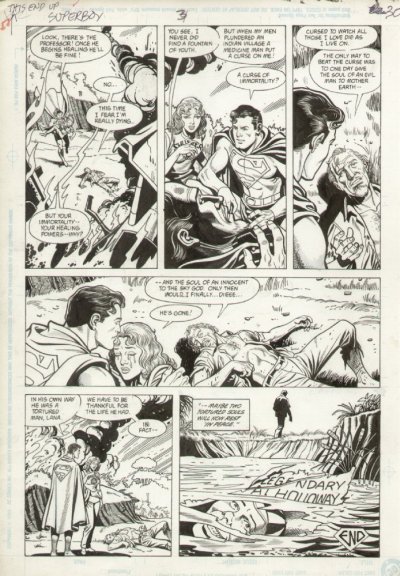 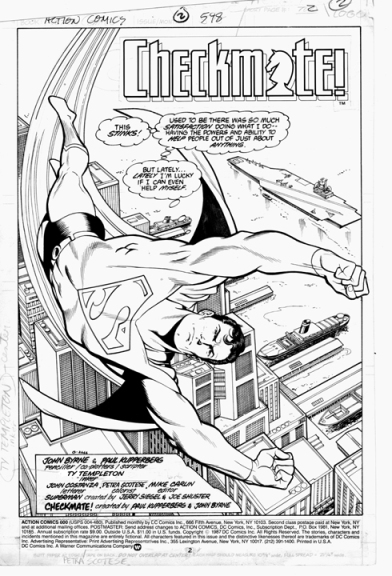 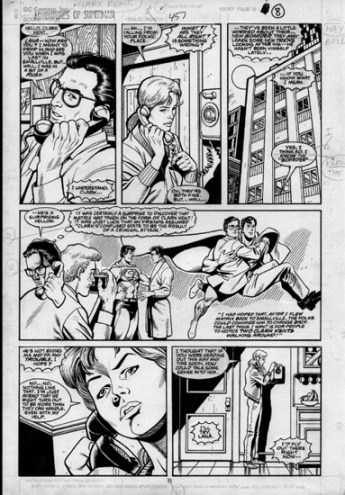 …and the definitive Superman artist for a generation: Curt Swan. 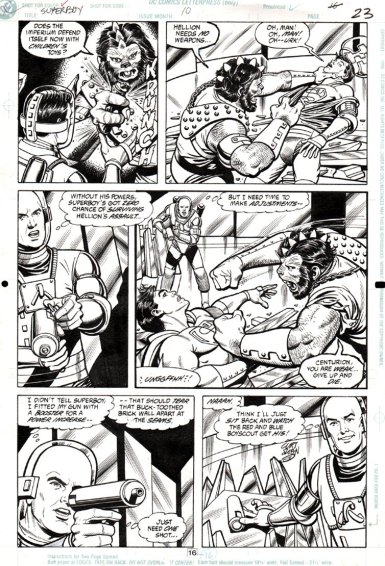 …as well as a dozen other artists working out Mike Carlin’s Superman office.  My single favourite image I contributed to while I was a Superman inker was this cover for Superboy: The Comic Book #4…penciled by Kevin Maguire and rendered by your humble blogger.  I rarely put my own artwork up on the walls of my house, but I consider this a Kevin piece anyway, so it sat on my wall for years.

I dare you to tell me that isn’t a great cover.

Superman was on hand the first time I co-wrote a story with my pal Dan Slott.  Though we’d worked together as a writer/artist team a few times, this was our first collaboration as co-writers, and our little tale featured Krypto and his big flyin’ master.   Go find a copy and read it, you’ll let go of a few honest tears when it’s done.  I’m proud of this one. 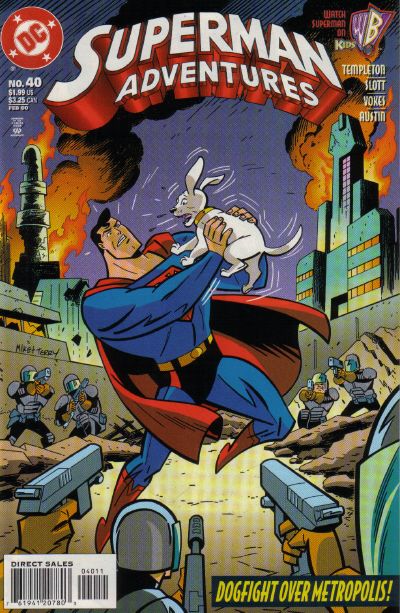 I got to work with Jerry Seinfeld because of Superman.  I was asked to design the look of  Superman for a series of Seinfeld/American Express animated commercials, as well as creating some odd Jerry and Superman scenes for billboards and print ads. 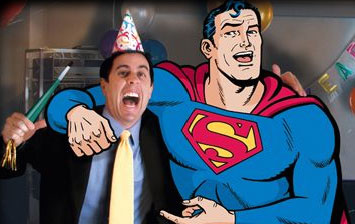 The original photo is Jerry grabbing at “no one” in the air, and I had to draw Superman to fit where Jerry’s hand was.  Kal-el is supposed to be saying “this guy’s crazy”, but it looks equally like he’s tickling the comedian.

Superman and Jerry bond over their dogs.

Is there any better job than being paid to illustrate Krypto starting a bromance?

Working for Superman offered me to opportunity to design collectable action figures:

and crayon boxes, and puzzles and t-shirts and colouring books and darn near anything with an S on it.  Of the many many images of Superman I’ve drawn for DC Comics over my career, this is my favourite: 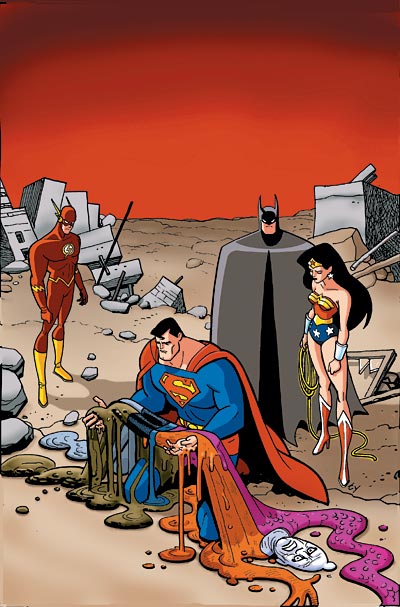 I know there’s other characters on this JLU cover, but there’s something about the Superman figure that sits just right with me.  His proportions, his expression, even the colours of his costume, all came together in this image and I didn’t screw any of it up.  I actually don’t hate this cover and my wife will tell you how rare that is for me.  I might be wrong, but I think it’s the last time I drew Superman for the mother corporation…once I get it correct, I scoot off and don’t do it again.

So happy birthday Mr. Cape.  You’ve been a delightful character to read as a child, to work on as a young adult, and to come back to every few years like a comfortable trip back home.   I hope I get another chance at him someday…and I treasure the time we spent together.

I’m always a little jealous when he dates someone else.

Here now, your BONUS Superman Moment- You knew this one was coming. 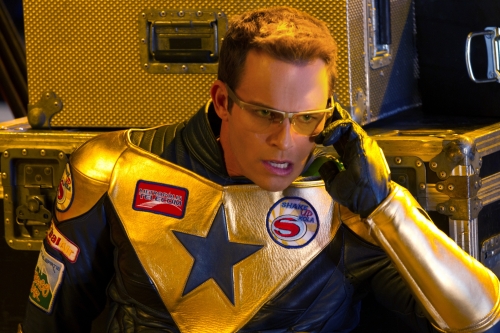 But when I saw these pictures of Eric Martsolf as Dan Jurgen’s excellent character, Booster Gold from the upcoming episode of Smallville (April 22), I couldn’t help myself – I started grinning from ear to ear. 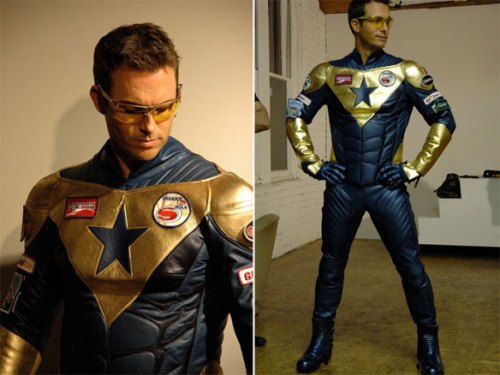 It’s not just that they get it so, so right– the actor is perfect, the costume is perfect, the sponsor patches, the goggles, the whole thing….it’s that this is a fairly obscure little character from the DC files that you just don’t expect to ever see adapted as a live action version.  That makes it a joyful surprise, instead of just another example the cynical Hollywood money spigot at work. 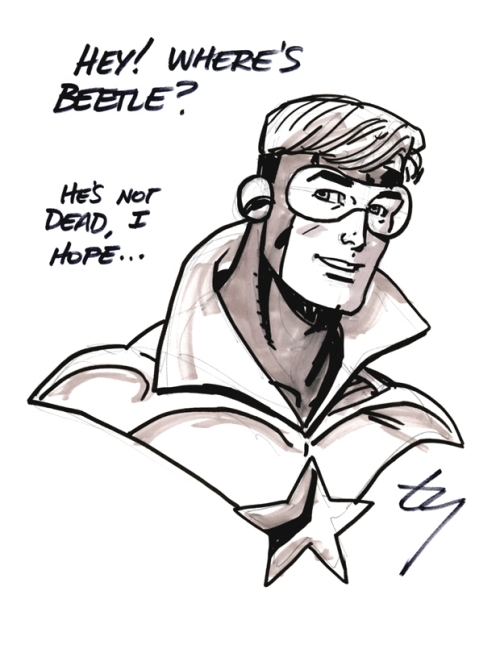 For those who don’t know, Booster Gold has a permanent place in my heart, 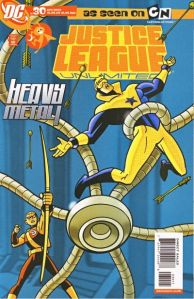 and I never get too far away from him (such as the convention sketch from last year, above).  Inking some issues of Dan Jurgen’s original Booster Gold series was my first DC gig, and Booster was one of the main characters on my penciling run of JLA a few years after that.   I’ve written him into stories for no reason other than I felt like it, drawn him in animated covers, and even did art for a Booster Gold Role Playing Game thing back when people still played these…

So it’s probably that combination of pleasant surprise and personal connection to the character, but I’m a giddy child waiting for this show to air – on the 22nd of this month!  I’ll let you know what I think of it after I see it!  Look at all the exclamation points!

Here now, your Booster Gold Bonus moment…try not to feel too icky.

The image comes from PORTALCOMIC.com but the page this comes from is fairly NSFW, so careful websurfers! 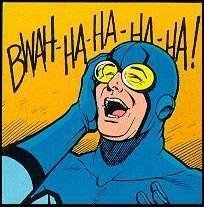 Posted in DC Comics, On Television