It’s a special time for rabbits.

On turkey day, folks eat turkeys, but on Bunny Day, folks eat jelly beans, chocolate and roast lamb.  Looks like the rabbit population knows how to work the game.

The part I didn’t make up:  The illegal “K” sound in the 18th Century.  It’s one of those parts of history you just don’t expect…

TY THE GUY OUT 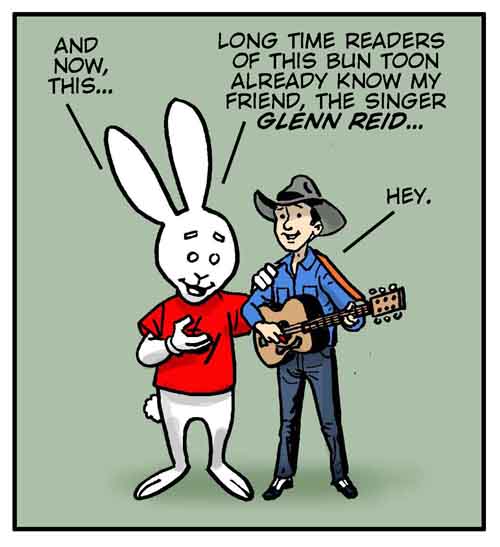 Glenn is releasing a NEW album of songs in a couple of months, and once again, I’m playing and singing my way into the backgrounds of most of the tracks.  Frankly, I’m not sure how most people release an album without my keyboards and vocals on it, but thankfully Glenn doesn’t make that mistake.

This time out, Mr. Reid is hoping to make a video to promote the new collection of songs, and he needs our help to get it kickstartered.

The song is a fun, country-fied peppy ballad called “THE SHELTER OF YOUR SMILE”, and as long as you’re not young enough to know what dubstep was, you might like it! 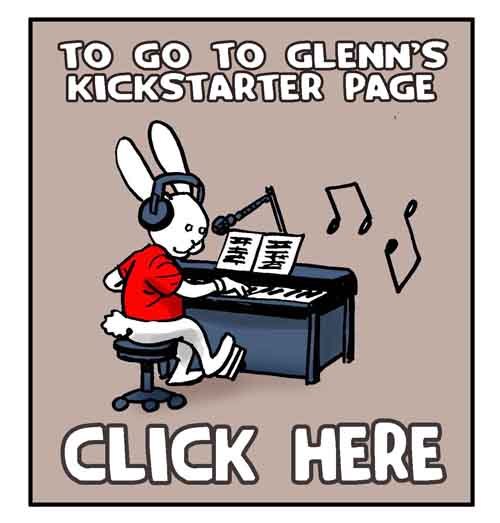 You get to hear the song, and watch a BAD video, asking to help make a GOOD one.

For a blood soaked thriller of an Easter Bun Toon, click here.

Third, But Not Least Bun Toons!

Half way through the Top Five,  and our entry at the middle spot was my least favourite Bun Toon to draw, ever.

This was one of the most read Bun Toons of the year, so it goes in the countdown, but I’d really rather it had never been drawn.

Another of the year’s most read Bun Toons  (in a virtual tie for third place so I’m putting it here as a balance) is one of my all time favourite Bun Toons.

CONTEXT:  Alan Moore had done a lovely interview towards the beginning of the year in which he had described his opinion of Grant Morrison as one of mild disdain for the sycophantic attention Grant had paid him for decades.

Too much like another famous cartoon relationship in my mind, to pass up this entry… 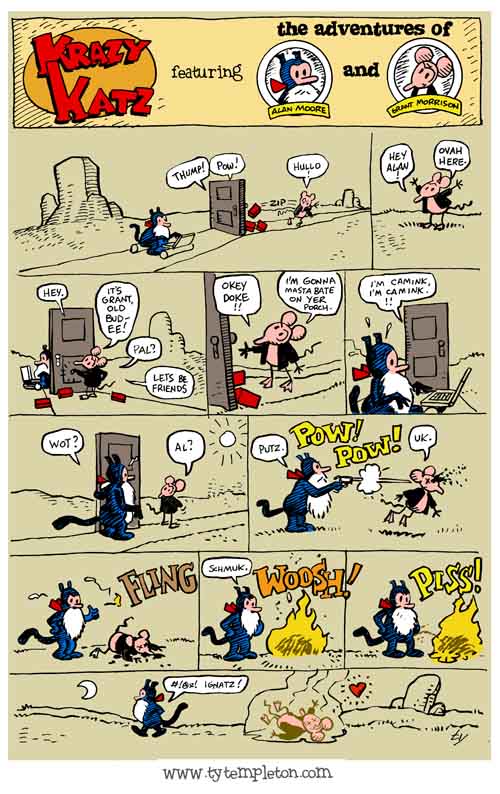 It seems that holiday themed Bun Toons simply don’t work (as yesterday’s low scoring Santa Story proved).  If I do a nice comic savaging a fellow professional for his opinion, there’s a line-up around the block to read it, but something I draw that pays tribute to a special day in the  year is culled from the honour rolls like bread mould at the back of a rye.

Clearly, one has not properly done Stoner Humour if it doesn’t piss off the North Korean Government or the people that imprisoned Tommy Chong, the American Government.  I have to work on angering the fascists more directly and use less bunnies.

More holiday-themed Bun Toons will be showing up on this top and bottom list…coming up tomorrow!

You’ll have to wait to find out if it was a hit or a miss. 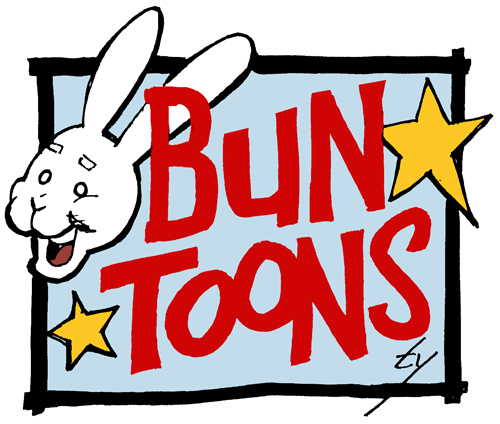 Well, it’s rabbit day, here on Planet Earth, and naturally a cause for celebration around the cartoon hutch.

It’s also 4-20:  A holiday celebrated by a sizable portion of my reading public, so I can’t ignore them either.

See!  Nothing but peace and harmony on the Stoner Easter Holiday.  Imagine it turning out that well if everyone was drunk.

For your bonus moment today, it’s ALSO George Takei’s birthday.  I’m wondering what side of the split holiday he comes down on?

Clearly it’s Easter. Here George is shown trying to make the symbol for the Holiday Rabbit with his hands. 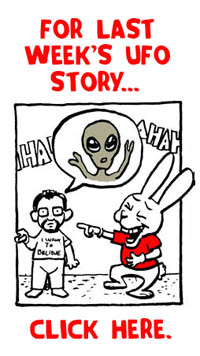 A link to the Bun Toon library of hundreds of other stories, most of which will not mention marijuana or Easter…

Not surprisingly, as a bunny, Ty has felt the need to do Easter Bun Toons every year. (And the occasional list.) While you wait for his 2014 Bunny-centric Bun Toon which will be posted tomorrow on Easter Sunday, I made you a list of past entries. 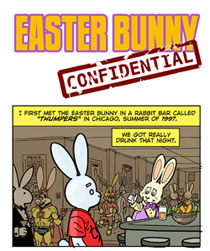 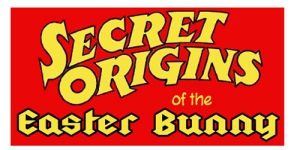 The year draws to a close, and I close out my drawings for 2013 with my annual list of what worked, what didn’t and what tickled my bunny bone for the year.  You get a replay of the five MOST popular Bun Toons of the last twelve months (chosen by most unique page hits) and the five that absolutely dropped into the ether with no attention whatsoever.  We get a range of readership here at Bun Toon Central, with some posts being seen by as few as a dozen people, and some being seen by as many four of five dozen people.

Coming in at the what’s-below-bronze position of #5 on the big, big hit parade of 2013 was a Bun Toon done in the style of Dr. Seuss’ immortal classic, ONE FISH TWO FISH RED FISH BLUE FISH.  The style suggested itself as a way to make a simple point even simpler, and since I was dealing with the complex issue surrounding Orson Scott Card’s writing an issue of Superman, Card’s particularly offensive positions on gay rights, and the possibility of a boycott of DC comics as a form of protest, I proved there’s no better way to start public discourse than to simplify it to the point of nonsense.

Obviously the BUN TOON worked, because there was no boycott of DC comics over this issue.  It probably helped that Chris Sprouse, the artist originally hired to draw the Superman comic Card was going to write, backed out at the last minute saying he didn’t want to be part of this controversy, and could he please go back to just drawing pictures, and then DC cancelled the issue as an afterthought.

I’ll score that as a win all around.

I returned to the ORSON SCOTT CARD controversy when the film ENDER’S GAME opened in theatres, with THIS screed about over-simplification: 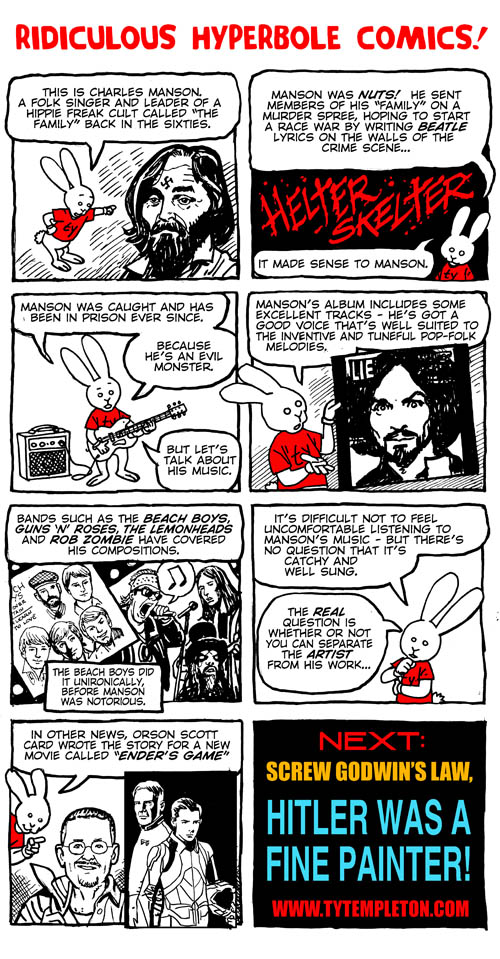 There, now that I’ve given a reasonable, balanced opinion about the man and his body of work, you can understand the details better.

Holiday themed Bun Toons were the big losers this year, as you’ll see as we go along.  After the great COLUMBUS DAY disasters of previous years (and the ARBOUR DAY debacle of ’05) , you’d think I’d learn to keep away from the subject of grand important holidays, but I can’t help but punch organized days-off in the groin.  It’s who I am.

This year, Easter (or BUNNY DAY as we call it around here) was a Bun Toon ignored by one and all.  Lucky you, you get a chance to ignore it all over again.  A bit of a warning, there’s some NSFW nudity coming up, but it’s subtle, you have to STARE at it for a while to see it, and then you feel all icky for staring.

Hah!  I made you look at a woman’s European styled under-area, all in the name of making fun of Easter!  HAH!

See you back here tomorrow for more successful Bun Toon fun featuring the comic industry’s leading lady, and another piece of crap no one liked featuring a true story from my youth.

Of course, as is tradition, we wish STAN (the man) LEE a happy 91st Birthday!  Stan always has his birthday the same day we start the Bun Toon countdown because you know Stan, he’s trying to horn in on my action.  Sheesh!  You get the movie cameos big guy, stop trying to hog the Bun Toons!

Now it can be told!

This holiday season, I’m finally answering the question that has dogged this annual springtime egg festival for centuries:  Why is Easter represented by a RABBIT?  Weeks and months of dedicated research has revealed the surprising…

Do you think it was a CO-INCIDENCE that the Supreme Court was taking up the issue this week?  The Bunny is a close friend of Justice Sotomayor, and she pulled a few strings to get this sorted out for her fuzzy LGTBQ pal.

I’m off to spend the evening protesting the local Maybelline Cosmetics plant out here in Mississauga with the local PETA folks from my home town…join me if you’re out this way.  We could use the warm bodies.

Because on Earth, eggs are normally hidden by rabbits, not by parents.

Ah, I can’t leave it at just that… 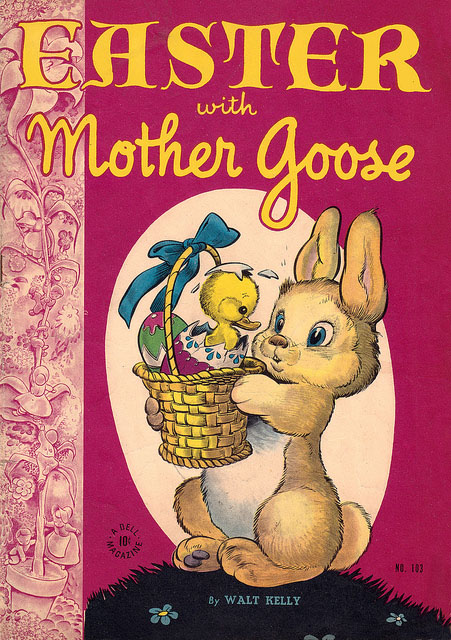 If you’ve never gotten your hands on an old Walt Kelly Mother Goose Holiday Special, you’ve never seen the glory that all-ages comics can attain.  These things are some of the most beautifully illustrated comics of ANY era… 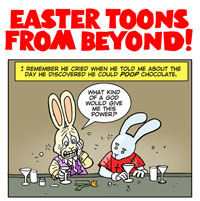 For the Bun Toons Archive, click the Year Round Bunny above

Not a re-run, but a preview

Tomorrow is BUNNY DAY in Mega City 1, and so the tradition is to put the Easter Toon up on Easter Sunday.  But Saturday is Bun Toon Day, and so we offer up the Easter Toons from yesteryear, to keep your Bun Toon Jones at bay for 24 hours.  See ya with the new one tomorrow, bright and early.

Here’s the Ghost of Easters Past.

All us rabbits bow to the master.  We consider Bugs to be our Branjelina, just by himself.

And last year, I revealed my secret BFF…

See you tomorrow for a BRAND NEW Bunny Toon in celebration of our special day.

The “Badger” in the credits here is not a character, but Mark Badger, who, along with author Joyce Brabner (Harvey Pekar’s widow), do a regular comic book about animal rights…which includes an anti-vivisection message for lovers of bunnies!

Speaking of anti-vivisection and loving bunnies…I will be spending my Easter Sunday protesting a well known Canadian cosmetics company with a corporate headquarters in Mississauga (where I live), specifically BECAUSE it’s recently come out that they still use rabbits in their labs.  SHAME on them, and I’ll be shouting that for most of my day tomorrow.   I’ll bring back photos and post ’em on the blog next week!  We bunnies stick together!  PROTEST ROAD TRIP!

for the COMPLETE archive of past Bun Toons, click the star of Bunny Day above

For one day per year, Rabbits RULE!

Remember, when eating a chocolate bunny, start with the eyes, and scream “Stop LOOKING AT ME!”.  It livens up the holiday. 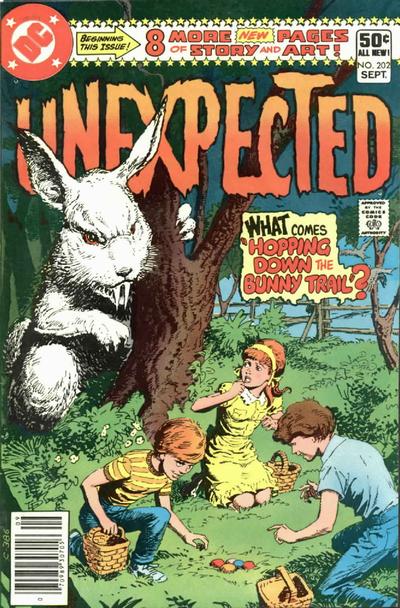 This is what happens when the bunny DOESN'T sleep it off at my house.

Bun Toons will be seen Tomorrow! (On Easter)

Hey everyone!  Since Easter Sunday is officially BUNNY DAY around the Western World,  I traditionally save my toon until tomorrow on this special holiday for us rabbits.  I’ve already seen it, it’s a funny one, but it belongs on Bunny Day, so patience, please.

In the meantime, here’s LAST YEAR’S  Easter Bun Toon, in case the lack of a Saturday comic strip is a hardship for some.

Ah, I was just kidding around.  The Easter Bunny and I are great friends.  We hang out together and stuff.

Eggs!  Chocolate!  Religion!  It’s like Christmas, only with more cholesterol.  But there’s only room for one king of the cartoon bunnies around here.  And I play for keeps.

Of course Bugs wins.  I was foolish to face him. 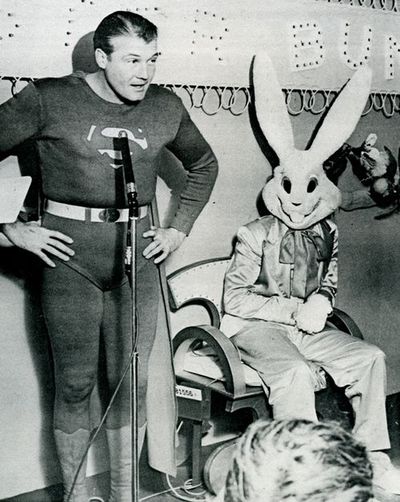 The rabbit's eyes! They burn into my soul! THEY BURN!!