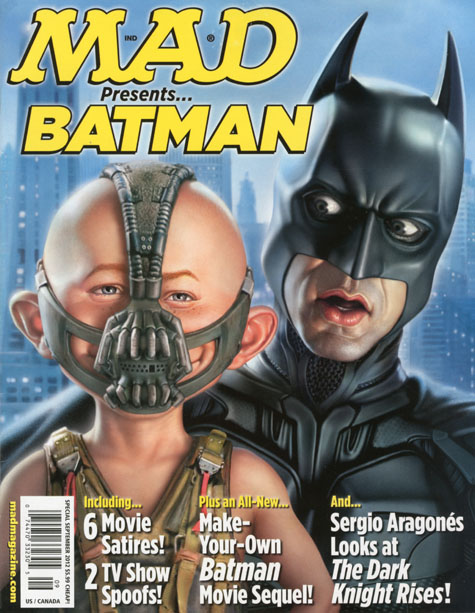 And just in case fanboy outrage is more your style.  Remember “Bill The Boy Wonder:  The Secret Co-Creator of Batman” is on sale everywhere.  The first book ever written (and drawn) about Batman’s REAL father, is being well reviewed and is FLYING off the shelves.

Who’s giving it good reviews?  Check it out…

Bill Finger for the win. And Mark Tyler Nobleman, too. And me!

And that’s not even mentioning my ongoing Spider-Man work (tying into LAST week’s big Super-hero movie.)

If it turns out I’m working on the Hobbit or the next instalment of The Bourne Identity, I’ll let you know.

Posted in Batman, Released this week

The Flying Fickle Finger of Fate points at ME!

That’s a trading card from a “Comic Book Creators” collector’s series put out by Eclipse Comics in ’92.   For those who don’t know, Bill Finger is more or less, the secret creator of BATMAN, never credited in print, never acknowledged by the general public, and badly mistreated by Bob Kane (the “official” creator of Batman).  What was done to Bill was a crime, pure and simple, and he deserves the recognition that he never got while he was alive. Somebody should DO something about this.

Well, somebody is, and I get to play along.  Mark Tyler Nobleman has written a book about the creation of Batman and Bill Finger is the center of the story FINALLY.  And I get to do the illustrations for this important story!!  As a lifelong Batman freak, I’m thrilled to be involved.  As a lifelong Bill Finger fan, I’m hyperventilating with joy that I get to be part of setting the record straight about Bill and Bob.

This isn’t Mark Tyler Nobleman’s first foray into the world of comic book origins-behind the scenes.  Mark gave the world an excellent book about the creation of Superman a few years ago called BOYS OF STEEL:

Illustrated by Ross MacDonald, it’s a delightful telling of the story of Seigel and Shuster and their moment of genius in creating that strange visitor from another planet who can bend steel in his bare hands.   The success of Boys of Steel led Mark to want to tell the story of Batman’s creation, and he’s done it in a succinct and touching narrative that will pull at your heart strings.

I’d love to show you some of the artwork that I’ve been working on for the last while (this is the secret Batman project I’ve mentioned once or twice here in the last few weeks) and as soon as I’m allowed I will….but for today, I’m happy to finally let people know I’m working on this.  I want people to buy it when it comes out, not just because it includes my work, but because Bill Finger deserves it.

Is it just me or do those look like bat wings on the finger? 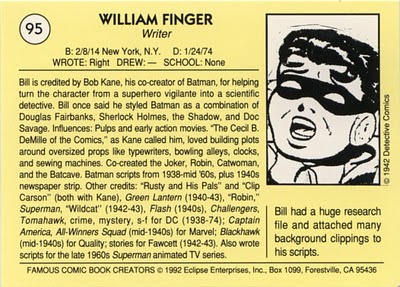 The back of Bill’s trading card needs two corrections:  Finger did not die on today’s anniversary as stated…he died on January 18th.  Don’t know why they got that one wrong.  Also:  He was born in Denver.  Oops!