The Led Zepplin of Comics

From left to right:  Bernie Wrightson, Jeffrey (Catherine) Jones, Michael Kaluta and Barry Windsor Smith, back in the Seventies when everything was hairy and fun.

Catherine Jones passed away this week.  She was one of my favorite artists and painters and creators of amazing comics.  I never met her in person, though I had gotten to know her just a little bit on Facebook in the last year or so… which was a treat, but it her made her sudden passing sting a bit more.

Thirty-some odd years ago, Catherine (then known as Jeffrey, before her sex-reassignment operation) was one of four superstar artists in the comics and fantasy illustration world who shared a space in Manhattan called The Studio.  This  magical treehouse caught my imagination when I was a teenager, because I wanted to make comics someday, and these guys took this art and comics shit SERIOUSLY.

I ate this book from cover to cover. Consumed it and digested it like a four course meal.

The most eye opening thing about that book up there, was that it introduced me to the fine art sensibilities of this quartet, especially Jones’ paintings and sketches.  He was the one that leaned away from comics towards painted expressionism and pre raphelite lyricism, and was clearly the biggest influence on the other three.  But Jones always held on to his OWN influences from the great fantasy illustrators of yore,  including  Frazetta, Howard Pyle, N. C. Wyeth. 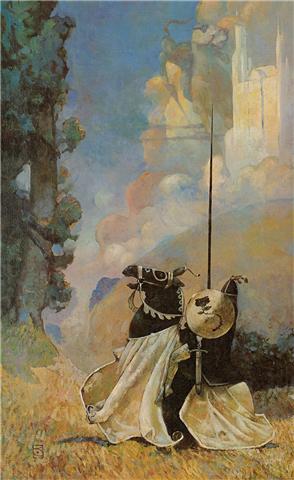 I adore Jones’ paintings, but I’m a comic book artist at my core, so it’s no surprise that my favorite work by this complicated individual was the delightfully hard to pin down Idyl.

This series of one and two pages comics ran in the back of the National Lampoon and then later in Heavy Metal (under the name, “I’m Age”) .  They were the most bravely unapologetic bits of pretentious irony I’d ever seen, and at first I thought they were a blunt satire of American comics – but as I read more and more of them, I came to see they were actually a subtle  satire about everything, and I fell in love with the series.  It hit me right between the eyes and spoke to my brain perfectly. And oh, the skill of those illustrations…

You should go spend time at Catherine’s website, where you can marvel at a mere fraction of her life’s work.

Sorry to see you go, Catherine.  You made stuff worth looking at.

I stopped calling these extra bonuses the “moment of zen” a while back as I was tired of ripping off Jon Stewart…but with Idyl, there’s really no other name for it.  So here now, your Jeffrey Catherine Jones Moment of Zen…