As I mentioned yesterday, aside from my regular teaching gig this week, I’m at the pencil and inking boards working on a few pages for a Marvel job, and so, I’m hauling out some odd, obscure and lost things I’d done for Marvel over the years (mostly in the 90’s and early aughts).  I never did anything for the actual comic book, but did quite a bit of work for the X-Men office through the licensing department.

(I know, who thinks of me as an X-Men guy?!?!?)  The cover above, is a fairly large painting (original is 12×18) , used (I think) for the cover of a fast food chain giveaway comic book.  My brain says Pizza Hut, but I can’t find it online.  Anyway…the basic layout wasn’t mine, I was sent a layout drawing from the license dept. (clearly used again for the cover of the video box to the right, either before or after I did mine, I don’t know which artist rendered that other version…) that I final penciled and painted.  It’s really “drawing in colour” rather than actual painting, as I didn’t really understand the basic techniques at the time.  I’ve since done a half dozen other paintings, and have learned a thing or two about colour, mostly that I’m better off doing it in Photoshop.

The interior page to the left is from the same project.  Again, I don’t have a copy, and it was at least fifteen years ago, so your guess is as good as mine as to what the hell is happening in the story.  I do recall that the tower of X-Men happily posing just below, is the back cover and I have a few other interior pages in the box.  Beyond that, anyone ever see this in print at a Burger King somewhere?

There are something like twenty of the video boxes, Mike Parobeck did four or five, and I did the rest.  I’ll include more here today and tomorrow, but I don’t have colour versions of all of them, as I was never sent a set of the boxes.  ( I have found them at stores, and bought copies, but don’t have the full set.  Sigh…you can see there was never a strong duty to send artists their printed work for 3 dimensional objects anywhere near as much as their comic art.  The licensing team is on their own to find the stuff in the real world.)

Those useless frauds perpetrated against kids in the nineties?  Well, I participated in the crime.  These are some of the X-Men pog sheets we created for the craze.  These sheets were impossible to pose, as all the heads had to line up neatly in the cut-out 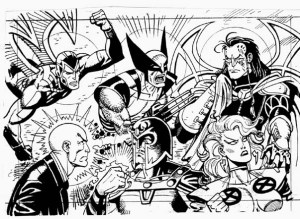 areas, while still drawing some sort of group shot.  Ech.  I’m not embarrassed by the drawing, but the gig itself isn’t one to tell mom about.   I can’t recall how many of these pog sheets I did, but these are the only two I could find in the basement in a box.  If the craze ever comes back, I’m all set to rule. 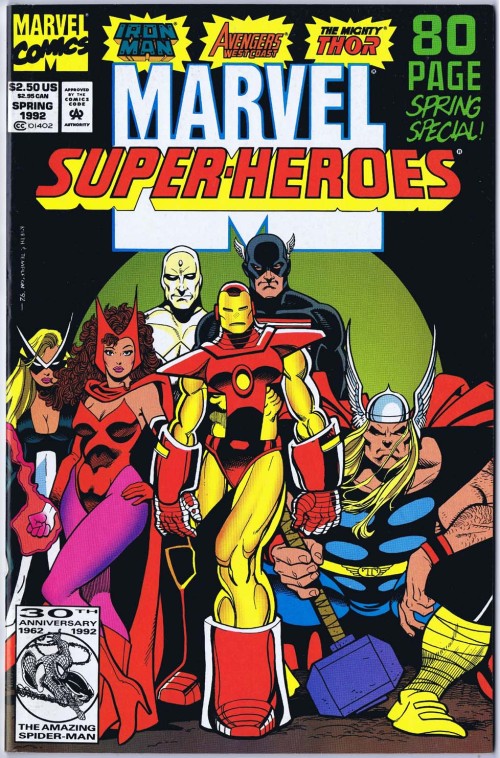 The Avengers cover above is the first paying gig I ever had at Marvel.  It’s inks over a lovely cover by Sam Kieth,creator of THE MAXX, ZERO GIRL, and star-illustrator of WOLVERINE fame, amongst so much else.  Sam and I started out in the biz somewhat together, and worked in a few indy projects before hitting Marvel and DC.  In fact, I introduced Sam to his first DC editor, which got him a Secret Origins gig.  When Sam was given his first Marvel cover, he asked me to ink it saying “I would make his exotic looking figures look more Marvel Style”.   I LOVE Sam’s exotic looking figures, but did as asked.  The end result is an odd mixture of both of us at once.  Much like the time I inked Mignola…it doesn’t alway work.  But it did lead to my first cheque from the House of Ideas.

Above is some pages I did for Moon Knight.  There was a lot of comparison between Moon Knight and Batman (deservedly so) and editor-at-the-time Joey Cavalieri decided to really play that up for a while, asking noted Batman artists to do a dimension -hopping story where Moony ended up in the Miller-Verse, the Infantino-Verse, the Kelley Jones-verse, etc.  in MOON KNIGHT #42 (1990’s, probably about ’95?) I stepped in to do the Sprang-Verse pages (about seven in total) as the real Dick Sprang wasn’t well at the time.    The silly Pool Shark cover came from an annual printed later that year.

So much Lost Marvel work, I still haven’t scratched the surface, but I’ll leave you with this one for today…the cover of “SALES TO ASTONISH“, a Marvel giveaway to retailers to promote their 2099 line…which didn’t seem to help.  I’m not sure why I was asked to do the cover, as I had nothing to do with the line itself…except at one point had been offered Ravage 2099 as a penciling gig, and was too busy to say yes.  Escaped with my life on that one.

Tomorrow, Nepotism Thursdays strike again, with my WIFE’S first work for Marvel (and some of my many “lost” Spider-Man pieces!)