This year’s #4 position, BOTH the most popular and the least popular, come from the last couple of weeks.  It was a wild swing in readership from one week to the next this December, but that’s standard around here.  You fickle monsters make me paint my backside and dance, and sometimes you love me, and sometimes it’s head first into the mud holes.

Not that I’m complaining, mind you.  I know how complaining comic book artists get treated on the internet…. 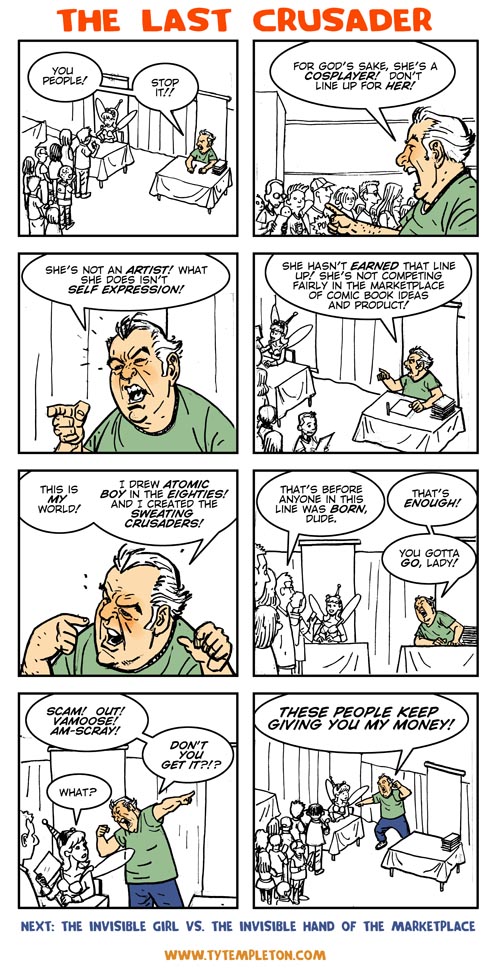 For those who don’t recall this tempestuous teapot, back at the beginning of December, a comic book artist (of my generation) named Pat Broderick had a word or two to say about cosplayers ruining conventions for people who turned out to be the same age, height and weight as Pat Broderick.  It was something about women in skimpy outfits blocking aisles, not earning their place, and generally being on his lawn when he clearly wanted to get them off his lawn.

Pat’s probably a wonderful guy, and the backlash was more about how inelegantly he complained about getting older, than any real animosity towards him, but for god’s sake, don’t wear any odd hats around the man…he’s nervous.

Our #4 LEAST favourite Bun Toon was the following week.   My fame and fortune crumbled and died in a scant seven days, and all because I cut off Santa’s foot.

I’ve learned my lesson.  No more hurting Santa Claus.  To make it up to my emotionally damaged readers, here’s one of my MOST popular Christmas Bun Toons from a couple of years ago, in which I do not hurt Santa at all, except for one or two moments in the “agonizer”.

See you tomorrow, for the THIRD most and least popular Bun Toons of the year….neither of which will be from the month of December, I promise.