Today I’m skull-explodingly excited to talk to you about a lost piece of Hoverboy TV that hasn’t been seen in nearly sixty years.   Episodes of Hoverboy’s “Gay Cavalcade” puppet show from the fifties ( often misspelled as “Gay Cavelcade”) have been found by a former puppeteer for the series, named Ross Gurch.   Gurch was recently featured on an episode of the A&E show “Hoarders”, and kinescopes of  Gay Cavalcade episodes were found buried in Gurch’s house amongst jars of his urine.

Ross Gurch at the height of his career, holding his famous alter ego.

Marcus Moore, curator of the Hoverboy Museum online, is paying out-of-pocket to get the episodes digitized and put online.   This Hover-fan is giddy.

Of the the three Hoverboy puppet shows,  Gay Cavalcade was certainly in the top two.  It featured host “Uncle Orval”, a 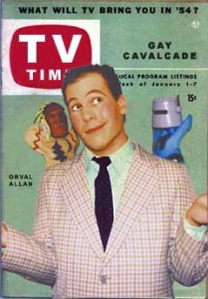 Hoverboy puppet, and a fairly racist portrait of a Native American puppet named “Chief”.  These three would get into crazy misadventures that usually taught Hoverboy a lesson about being a good citizen or whether or not it’s okay to play-wrestle with your cousin if she’s wearing a sweater.  The shows were broadcast primarily in the American Southwest with stations carrying the show in Arizona, New Mexico, Nevada, Colorado and Hawaii.  Mildly popular for a while, the Cavalcade even put out a Christmas Album in 1954 – which I actually own a copy of:

“REPENT SINNERS, LEST YE BE DAMNED” is a surprisingly catchy Christmas ditty.

The BEST (and shortest) clip in the kinescopes that Gurch found in his house is an ad for Tareyton Cigarettes done by the Cavalcade cast during a broadcast.

Back in the Fifties, you were allowed to advertise cigarettes to children.

People might remember Tareyton Cigarettes as the brand that went bankrupt due to an urban legend back in the 60’s.  A  rumor convinced people that the Tareyton company was a front for Adolph Hitler, who was living in Argentina and running a tobacco empire to finance an army to re-take Europe.   The only evidence for this was the unfortunate design of  their company mascot, “Wagner” seen on the cigarette packs themselves, but it was enough to destroy sales when the gossip got around. 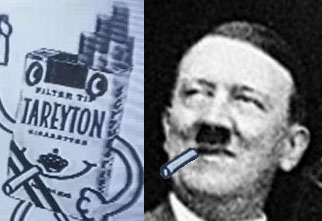 Admittedly, the design choices are unfortunate.

Before the company coughed up its last lung in 1962, it was one of the main sponsors of Hoverboy’s Gay Cavalcade, and the cast dutifully did commercials for the product, just as other shows did at the same time. 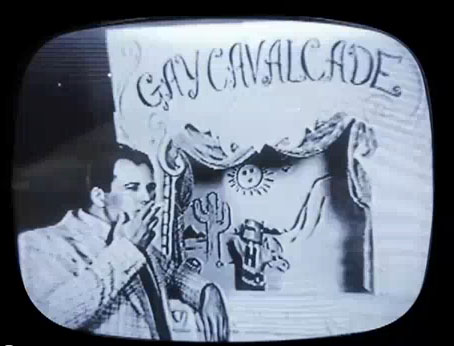 This was a KID'S SHOW! Seriously!

The Flintstones did it.  Everybody did it.  It was a different era.

Of just press the image above to launch the video at youtube...I can't embed video on this blog, yet.

And we all thought Joe Camel was evil.

The smoking zombie in the lower right of this cover caused a Senate sub-committee to label Hoverboy #3 as "subversive" and "leading to juvenile delinquency" in 1953, but the TV version of Hoverboy was ADVERTISING cigarette products without complaint at the same time. It's a crazy world, huh?