Wizard World Toronto, a little convention art, and the GREATEST CON SKETCH OF ALL TIME! 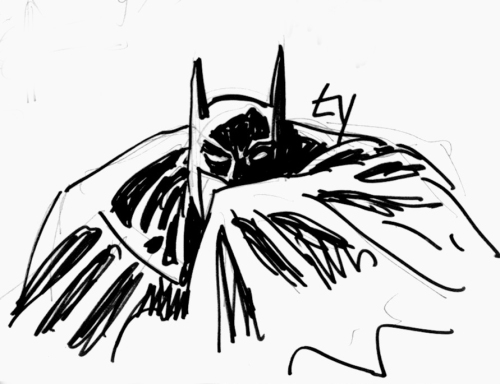 I just got back from Wizard World Toronto, and boy, are my arms not tired.

Not because I live in Toronto (and the flight back wouldn’t affect my shoulders, get it?)  but because I spent the weekend, not sketching particularly much.  No more than thirty  sketches over a three day weekend, and at a big convention, I usually do fifty on the Saturday alone!   At first I 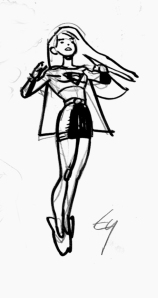 One of my less embarrassing con sketches of Kara Zor-el.

thought it was me…did I have a piece of meatloaf hanging off my face?  Did I wear my misanthropy on my sleeve too obviously, or was it the whiff of urine on my street clothes?

No, it was happening to almost everyone at Toronto Wizard Con, (other than Dale Keown and Richard Pace, who seemed to have a crowd around for a while on Saturday, and Adi Granov, who had a minor crowd on Friday).  The attendance was thin, and mostly wrestling fans there to see the Iron Sheik and his pals.  It’s always a bad sign when you start doing sketches for the other con guests or dealers because neither they, nor you, have anything else to do for the next ten minutes.

Too bad… The Wizard folks were nice to us.  LOVELY volunteers, good people…they set up my bootcamp lesson/con panel and promoted it (surprisingly well attended, thank you), and were handing out the water and smiles.   It was Wizard’s first big convention in Toronto, and I was rooting for them.  Let’s hope there’s a few tweaks

Fans love Batgirl. And a lot of fans like her bum. I do what I'm requested...

and fixes before next year rolls around, and the thing rivals San Diego in the future.

The low point came on Saturday when some douche-twerp couldn’t resist the demon on the shoulder telling him to pull a fire alarm.  It emptied out the convention center in the middle of Saturday afternoon—taking nearly an hour to sort out whether we were burning up in a fire, or doing the world’s biggest HOKEY POKEY.   Not everyone came back when it was over.   Hats off the perished souls of Wizard Con Toronto, 2010—you will be remembered.

Highlights include:   being seated next to Gail Simone and Her Mysterious Husband, with Dave Ross to my left, and Kent (Planet of the Apes) Burles to my right.  With things a tad slow, I got to hang with the legendary Gail Simone and Her Mysterious Husband, and  got to see Dave Ross’s new pencils for an amazing Star Wars comic he’s working on, and  laugh with the always 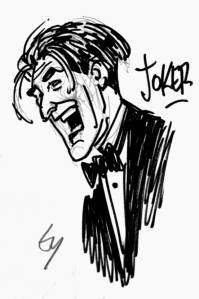 charmingly French Canadian, Yanick Paquette, and drool over piles of just gorgeous AGENTS of ATLAS original art by my buddy Leonard Kirk.   Len is one of those illustrators I’m openly jealous of, partly because he does THE best convention sketches on the planet

The rule with me at a con is, you get the sketch for free, but it’s done in five minutes.  That way, everyone who wants one gets one, and I give back a little for the fans.  You guys deserve it.  But we artists rarely get to see our con sketches after we let you have ‘em.   About one out of ten, I pull one off that I wish I could hold onto…it captured just the right gleam in Joker’s eye, or the right gesture as Robin jumps off a building.  I sometimes ask if the fan could scan it for me and send me a copy when they get home, but after twenty years of doing this, I have less 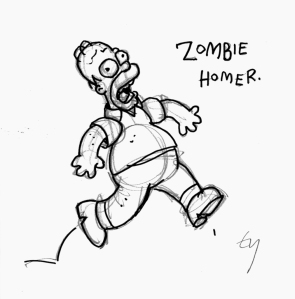 than a dozen scans of con sketches to show you, and hardly the best of the best.

Zombie Homer is the only one from this year,  as I used to think my BONGO contract forbids sketching the Simpsons, but Ken Wheaton (fellow toiler in Springfield) informs me, I can doodle inside published Simpsons books, just not regular sketch books and on blank pieces of paper…  Ken had a PILE of copies of TREEHOUSE OF HORROR: DEAD MAN’S CHEST for people to buy, so I did more Simpsons doodles this weekend than anything else.

As promised, here’s my favorite con sketch of all time, and the recipient was lovely enough to send me one. 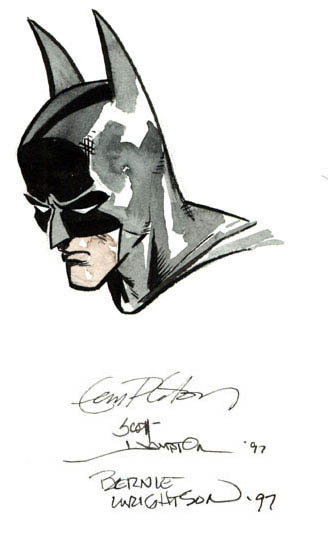 It was in Paris, and I was seated in between Bernie Wrightson, Neal Adams, and Scott Hampton.  A group of BATMAN artists were touring through Belgium, France and Switzerland and enjoying all the lovely sauces we got with every meal, when some Euro-fan asked if Mr. Wrightson minded inking 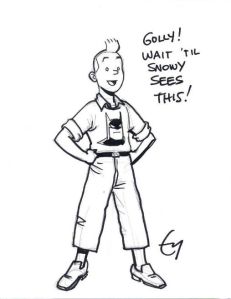 the Batman portrait/sketch I had just done for him.  Watching my meager sketch be inked by Bernie was mind blowing enough, but then watching Scott Hampton add those moody water colours, I came this close from stealing the image back for myself…I have the scan though, and I share it here with you guys…the word’s only Templeton/Wrightson/Hampton collaboration.

Neal Adams did not participate in the sketch, but I have something better from Neal…something I’ll show you guys in a future post.  I have to keep the suspense going SOMEHOW.

Oh, and PS:  This week, I’m promoting this new Simpsons collection, NOW ON SALE.  I’ve got a fun pin-up inside, and the rest of the book is okay too, I suppose, if you like hysterical comic books. 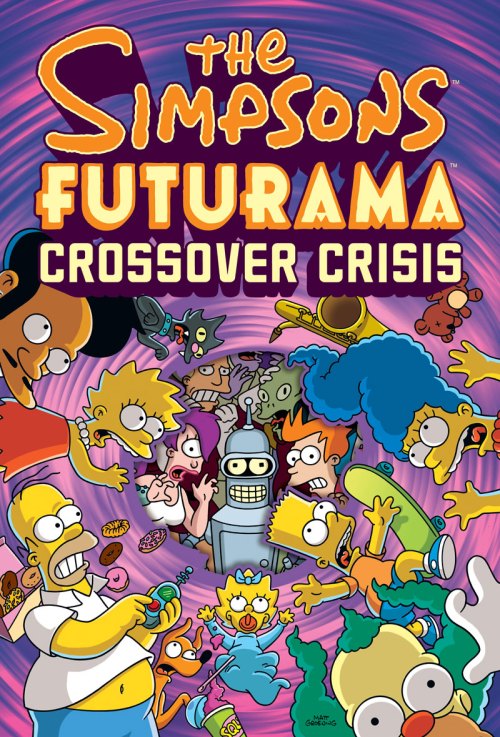