So, DC announces their imprint, WILDSTORM COMICS, is pulling up stakes and going quietly into that good night.  That’s too bad.  We’re told it’s part of a streamlining of DC’s business machine as it moves into the west coast movie industry, but it’s still a failure if the books ain’t selling enough to keep ’em going.

“So long, Wildstorm“.  We can’t say we hardly knew ye, as you were here for quite a while, and you left an impression.  Sure, you stole every character you had, some of it bordering on criminal, but happily quite a bit of what Wildstorm did was quite good.  And since I’m in a good mood, we’ll leave the mistakes behind for today and focus on…

THE TOP SEVEN WILDSTORM COMIC BOOKS OF ALL TIME

Trust us, this is nothing like the X-Men. For instance, the dwarf is smoking, and the guy with claw hands is taller.

This is not on the list for the characters or the premise, certainly, as that all sucked.  And it’s not for the entire run, obviously, because most of it sucked, and that’s primarily because the characters and the premise sucked.  But there were moments in that series where the craft of its creators was so high, that you had to sit back and marvel at how GOOD and fun comics could be when done right.  During the Alan Moore run (illustrated by Travis Charest, amongst others), or during the Travis Charest run, (written by Alan Moore, amongst others), WildC.A.T.S. was big and sexy and delightful and the PERFECT little pocket of escape from the world.

I'll bet these comics are pretty good. Kind of like the X-Men, only with better writing.

Okay, it WAS the X-MEN with a dwarf where the bald cripple was supposed to be, but it had NONE of that eighty-five year back-story to remember while the leaping and punching went on.   And let’s never take it away from the Jim Lee-illustrated issues – consistently the best Jim Lee ever looked. I usually like Jim Lee art, but I LOVE Jim Lee WildCATS art.

All so pretty. And that's not the Hulk back there. Or Superman in a white cape. 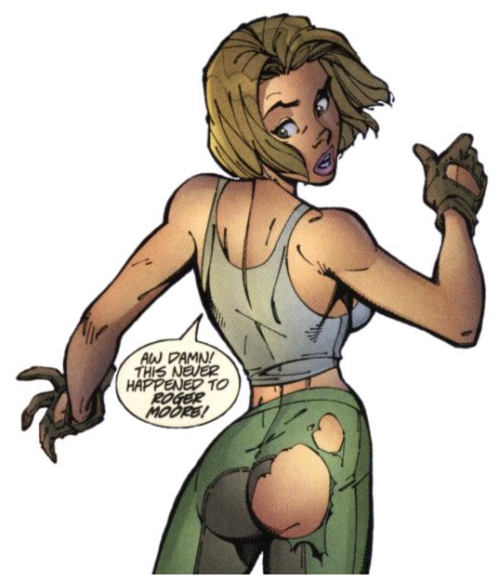 If you’re a boy, and you like naked chicks with guns, or if you’re a girl, and you like other girls to be naked, and carry guns, than this was your comic.  To be fair, there were times that the characters would hang-glide in a bikini with guns, or sneak into a museum wearing a leather cat-suit, while carrying guns, but I think you get the idea. 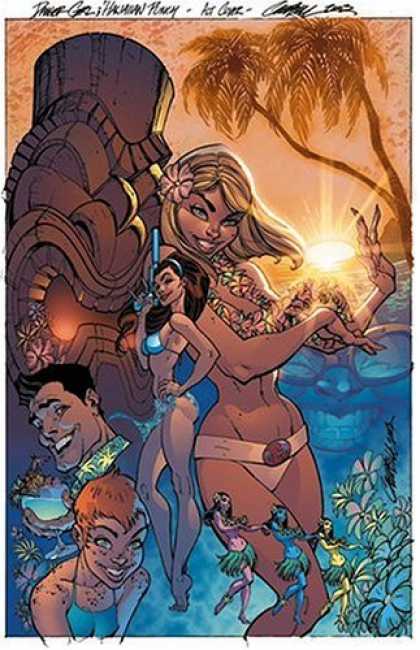 I imagine you can see the appeal of this title, no?

It was the comic book version of Charlie’s Angels, only with more naked girls, and probably more guns.  J. Scott Campbell’s delightful sequel to Gen13, and more innocently fun, somehow, even with all the bums and guns.  It’s says it’s for adults, but it’s really for the trapped teenager in all of us. 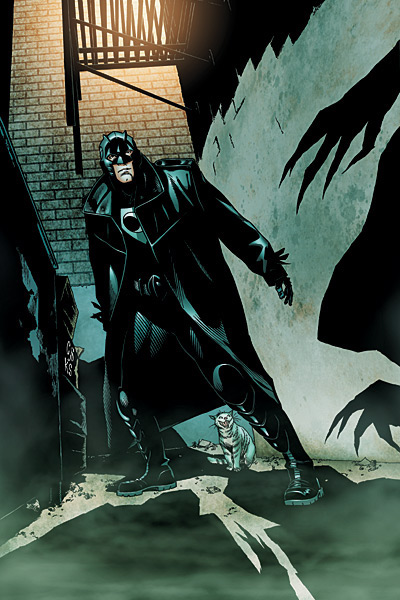 Come on, you love him too! And he's nothing like Batman.

Without question, Wildstorm’s single best character.  He’s gay Dark Claw, and as I’ve mentioned elsewhere, I couldn’t get enough of him.  Apparently, I’ve gotten all I’m gonna get.  He’d be on this list  just for his starring role in The Authority, but his solo series started strong, stayed strong, and even petered out strong.  I don’t want to give away the punch line to the time travel story arc that starts it, but it may be my favorite time travel comic story of the last twenty years.   Created by Warren Ellis and Brian Hitch in their stellar run on the otherwise not stellar Stormwatch, Midnighter is too good a character to lose. 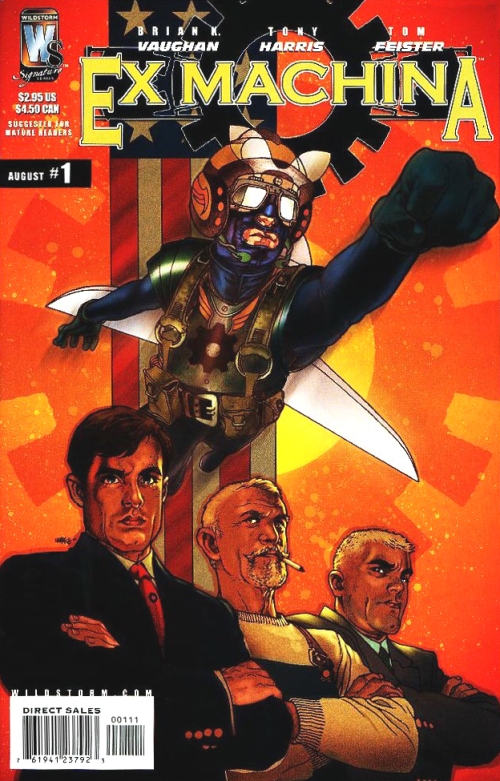 In every way, shape and form, comics for adults, and by that I don’t mean that it was another parade of tits and swords like Danger Girl was.  Instead it was a mixture between a super-hero potboiler and a complex soap opera about municipal politics.  Something that only an adult would get, or be interested in, no matter how many jet packs or talking evil robots show up on the cover, it was just for us aging fanboys.  Indescribably odd, but entertaining as hell.
Written by Brian K. Vaughn, and drawn by the lovely Tony Harris.

The three step formula for this series was quite simple:  Every issue Warren Ellis and John Cassaday would
a)  Re-imagine a beloved old character (such as Doc Savage, Godzilla, The JLA, etc) and then…

c)  Then the three weirdest “investigators” in the world would show up and do astoundingly weird things, and they would find out what happened.

That's also not Doc Savage in the logo, upper left.

Eventually it turned out, it was all part of one big weird plot featuring the “fourth man” and the “secret history” of the world, and it was all cool as hell while it was going on, especially Elijah Snow.

The series itself died and was resurrected years later, more alive than before.  And though it wasn’t his very first gig, it was the gig that gave the world a semi-regular visit with John Cassaday, for which we all owe Wildstorm a thank-you.

This is where All-Star Superman grew its balls. And that's not Batman, or Superman or anyone like the Justice League anywhere in this image.

An exploration of the theme of the benign, but fascist super-hero, first played with in Alan Moore’s Marvelman – I mean Miracleman – no, I mean Marvelman.  But rather than feeling like a re-hash, AUTHORITY featured such a line-up of top flight creators for so much of its run (Warren Ellis, Brian Hitch, Grant Morrison, Frank Quitely, Glen Fabry, Gene Ha, Mark Millar and more) that it had no choice but to be interesting.  My favorite characters were Midnighter and Apollo, but Hawksmoor, Jenny Sparks, The Doctor, maybe even Kev…all running a tight, close second…..  I understand the series started welcoming members of the WildCATS and GEN13 on board as sales lagged, but the first decade of the AUTHORITY was, as we said back then…da bomb!

That's not Superman on the sign, and he's not talking to Wonder Woman. What IS it with you people, seeing things that aren't there?

Kurt Busiek’s and Brent Anderson’s love letter to everything we live and breathe about comic book heroes.  I think this is the series that started the trend of “sampling” characters from other companies with a boldness that bordered on plagiarism. 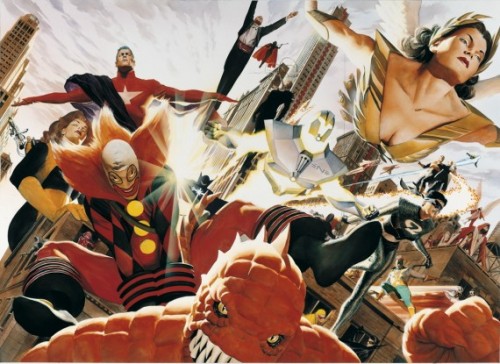 The Thing, Spider-Man, Wonder Woman, Superman...none of those characters are in this drawing, seriously. You'll never find them.

It wasn’t hard to figure out the disguises that Kurt and Brent, and cover artist Alex Ross, put on Superman, Batman, Spider-Man and The Fantastic Four, but that was entirely the point of the fun.  This was ALL one crazy What-if-Elsworlds-Imaginary story that we got to play in, and it was always, always, always a treat to visit.

ASTRO CITY started as an Image Comic, then it became part of the Homage Comics line, which was absorbed into the Wildstorm line, which is now being cancelled.  Astro City will survive this.   There will always be a place for this book with fans, no matter how many publishers it leaves in a smoking ruin.

Sleeper: Too tied into Wildstorm Universe continuity to be truly compelling, but Ed Brubaker’s scripts and Sean Phillips’ art were too good to dismiss.  I read them in spite of myself.

Arrowsmith: World War One fought with Harry Potter magic, with doughboys riding dragons, fighting goblins, and getting covered in mud in a trench.  Like Fables with way more explosions.  By Kurt Busiek and Carlos Pacheco.