Ty is always working, but the work isn’t always “visible” to the public at large, as published work. Besides his art and his writing, he teaches, he mentors, he writes interesting lists, and  he has several ongoing projects right now (including Hoverboy). In fact, he is so busy, all of the time, we sometimes forget when he does have work out, until the comps copies turn up at the house.

So, here’s a list of published work as it comes out, or begins to be advertised…for the old stuff, check out Grand Comics Database which seems to have a pretty extensive list of Ty’s credits (619 and counting…). Ty hasn’t had a look through lately, to see if he can spot anything missing.

(And, as always, it will take some time to put this together…)

Ty agreed to draw one-pagers for his buddy, super-hot  writer Dan Slott. One per issue, four issues in all. 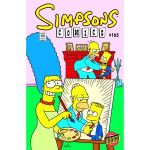 Ty contributed the art for a two-page spread in one of his favourite publications.

Ty did all of the art for Chapter 3 of Dexter Early Cuts, online webisodes each showing one of Dexter’s early murders which were mentioned on the show, but never shown in detail. The animation for these motion comics was done by KTVMI (KTV Media International).

released on January 7, 2010 available on YouTube.com