When this started, I figured it would be a one or a two day thing, but the more I dig, the more I realize, I have an avalanche of images for Marvel projects.

And I haven’t even gotten to any of my Underoos or Candy Apples work yet!  Today, a clearance-style parade of the X-Men video and DVD box covers you haven’t seen yet!  Heck, some of these, I’ve never seen.

You’ll notice that all these covers have the wrong title, or often the same title (Deadly Reunions), even when they’re clearly telling the PHOENIX SAGA (those images of Jean crashing a Space Shuttle and flying away from the ocean are a bit of a giveaway).  That’s not a sign that the producers of the show just plumb ran out of titles, it’s that I started including suggestions for the title placement when I sent in the artwork (so we wouldn’t have any more of Wolverine’s arms covered up), and the only title copy I had available was from the first of the video

boxes that I’d scanned.  So that title became the title of ALL the series (more or less) from a certain point on, when I was laying out the covers.

Look down this column a little bit, and you’ll see what is probably my favorite of this series…starring Wolverine and Alpha Flight all in one cover?  This Canadian boy was happy to play with THOSE toys for the day when this one came in.  Towards the end of the series, they were doubling up the episodes in each box, so that you could get twice as much mutant action per tape, and the covers were asked to be “split” images from that point forward.  It made for more challenges, as it’s hard to design a striking cover with a big f***ing line down the middle. 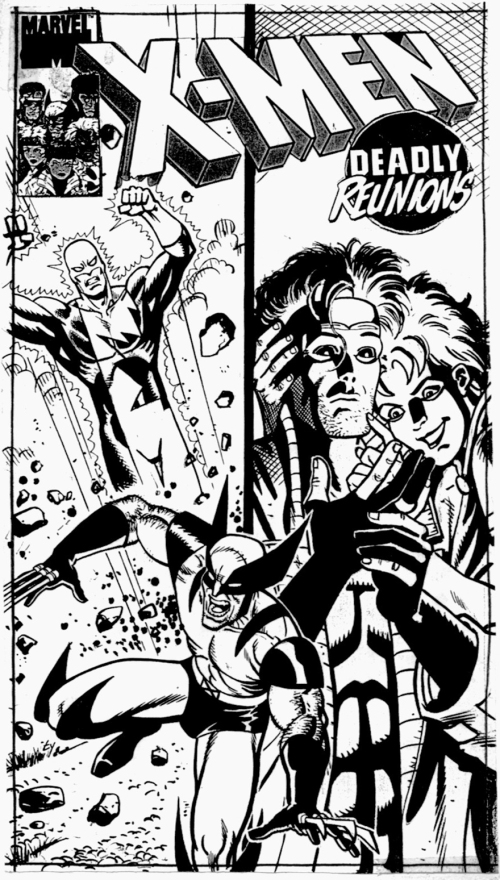 Just as I’d gotten used to doing TWO images per video box, suddenly for this next cover, they went for THREE episodes in one tape, and asked “could I include the following characters in the cover:  EVERYBODY in the Imperial Guard, and everyone in the X-Men?.  And the New York Yankees if you can fit them in…” I got out the triple zero brush for inking this one.

This was for a store poster, that ended up being printed something like seven feet tall.  I actually saw one in a

video store, this GIANT thing…and I asked the store if I could have a copy of the poster when the promotion was done, as I’d drawn it and they wouldn’t send me a seven foot poster.  The guy in the store said he wanted it for himself, and asked me to sign it.  Which I did.  So THAT guy has a version of this poster, and I don’t.  Hmmmph.

That’s it for today’s Marvel Madness Parade. Next up are a set of images for some Marvel Card series that no one, I mean NO ONE has seen outside the industry, and it’s not because they didn’t print up lots, and didn’t distribute them…it’s because…wait that would be telling.   See you later, Marvel Zombies.