I actually matched the day and the hero! Where's my cookie?

Set your Bucket Dials to ADVENTURE! This is an actual still from the legendary PUNCH FORCE 5!

We’ve been given a lead on another lost treasure!  An episode of the legendary series, “PUNCH FORCE 5!” from 1976,  Charles Nutt’s last big Hoverboy project before his spectacular murder/suicide in 1979.  Episodes of the show are extremely rare, as the cartoon was taken off the air in a criminal negligence case that earned the episodes a rating of,  “NC-100, Illegal to display in public“.  We’re hoping the statute of limitations has expired, or the people who came up with the rating are dead.  (The only other  TV episodes to earn this rating were seasons 2-4 of NBC’s HEROES.)

Punch Force 5! co-star, Danny Bannon: The Pantsless Detective, and one of his trademark "strategically placed bits of rock".

PUNCH FORCE 5! was Hoverboy’s version of the Super-Friends, mimicking the style and premise shamelessly.  The series teamed Hoverboy with other Vigilance heroes, including, THE PANTSLESS DETECTIVE (a not-so private eye), THE LITTLEST SARGE (a tough NCO with the kind of blind patriotism only a 10 year old could embrace), and METALGUY, (a refrigerator-clad appliance repairman turned vigilante). 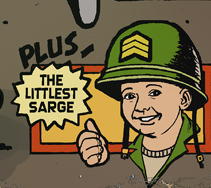 I don't have a screengrab with the Littlest Sarge, but here's his image from the cover of HOVERBOY #83

Unfortunately, the character of Metalguy inspired a group of Idaho children to sneak into a junk yard and climb into abandoned freezers in an effort to fight crime.  Unlike an episode of PUNCH FORCE 5!, this was a misadventure, with no happy ending, except, I suppose some free publicity for the junk yard owner.  The resulting civil lawsuit bankrupted what was left of Vigilance Pictures as a viable studio, and the criminal negligence case destroyed much of Nutt’s savings while he worked desperately to stay out of prison.

A black and white image of Littlest Sarge #1, taken from an ad on the back of Hoverboy #91.

The  screengrabs throughout this article were sent in by Richard Fader, a Hoverboy fan from Ft. Lee, New Jersey.  We have asked for some better scans, or a copy of the show, but were met with a request for a ridiculous amount of money.  At least that means the show exists!  And that means we’ve got a LEAD!  So stay tuned, Hover-fans…we might be able to upload the WHOLE show soon!

One response to “ANOTHER ASTOUNDING PIECE OF HOVERBOY HISTORY FOUND!!”