The all-nude fight scene has been a staple of literature since Eve asked Adam to bite into the fruit of knowledge and Adam said, “Make me.”

This can't be legal. And it better not be in a museum somewhere.

Back in the really old days, when the Youtube was called “actual Roman gladiators”, naked fighting was literally the “bread” in “bread and circuses“.  The circus part involved lions, but that’s another story.  What matters is that a snarling knock-down, drag-out is better when the delicate goodies are in play, and never more so, then when super-powers are involved.

And so, to continue my scholarly series about the prurient world of comic book decadence (following the highly educational “LOIS LANE: BONDAGE QUEEN” and “Comic Book Easter Zombie Parade” posts), and bring to you…

But before the festival of naughty bits, three quick ground rules:

RULE #1:
No Adult Comics. No taking the piss out of WARRIOR NUN, DANGER GIRL, VAMPIRELLA, or 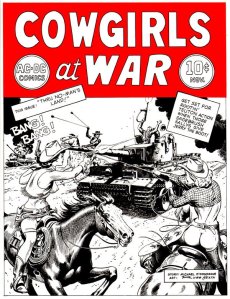 ANYTHING HOWARD CHAYKIN HAS WRITTEN as that’s low hanging fruit, and I don’t pick, grab, fondle or tug at so easy a target.    Sadly, it means no COWGIRLS AT WAR, but we’re sticking to mainstream super-heroes—and do I mean STICKING!

RULE #2:
Only one nudie shot per customer.  WOLVERINE, for example, can pop it out of his pants as often as he pops them out of his knuckles… if we don’t impose the limit, the whole list becomes about Logan’s dangly-bits.

RULE #3:
The appearance of nudity isn’t good enough.  The character must have actual genitalia.  Sorry Howard the Duck and Silver Surfer. 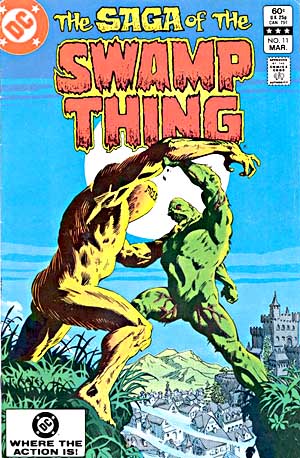 As sexy as this super-hot cover seems to be, I consider it cheating if there’s no possibility of balls.

And now, without further ado, or further use of the phrase “dangly-bits”…

As a millionaire playa, Tony Stark was always willing to slip out of the Armani suit for the hunnies, and as a drunken gutter dweller, he was willing to step out of the Iron Man suit and give it to his pal Rhodey.  The suit, I mean.   Clearly Tony is very willing to drop trou, and that’s why he’s so calm, cool and TEACHING SCHOOL in this nude-fight classic.  With nothing but his “little Iron Man” to help him, and a few well remembered “training sessions” with Steve Rogers, Tony Stark smoothly kicks butt while his own is dancing in the breeze.

This is why they call him "Shell-Head".

Flee, enemies of democracy! The American Superman can stay clothed for only SO LONG...

The Watchmen is the greatest super-hero comic book of all time so it has to be on all lists that include the words “greatest” and “super-hero”.  Lucky for us, the naked fight scene between Rorschach and Doc Manhattan in Issue 12 is a keeper!  And it follows memorable  naked quantum physics scenes and naked menage a doppelganger scenes that changed my dating ambitions forever.

The socio-political implications of Alan Moore’s narrative and the intricate mechanism of this novel have been discussed endlessly by greater critics than I, so I’ll just leave you with two thoughts:

1)  It’s bad enough being killed by a friend, but killed by one waving his little blue weenie at you is insulting.
2)   Rorschach said was naked without his mask on, so he’s joining Doctor Manhattan’s free spirit–dying with his nose and lips exposed. 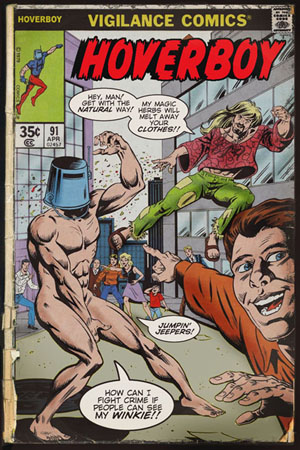 With all the tags that say "nude Super-hero" this cover is going to get a lot of web hits.

If ever there was a reason to avoid calling him “The Bucket Headed Super-Hero” this issue is it.  After being hit with “fiber melting herbs” by the hippie super-villain Doc Natural, Hoverboy is forced to fight crime in the nude.  He learns to avoid shame by reading the first part of Genesis over and over, and eventually smacking anyone in the face who looks at him “down there”.

#7
TARZAN VS. TUBLAT the GORILLA

If you’re into the twin aesthetics of decorative baroque, and boy’s pink bums, you can’t do better than Burne Hogarth’s TARZAN  graphic novel, published in 1972 by Watson-Guptill.

I can't explain this, and I won't even try.

Freed of the comics code, Tarzan is naked for the first hundred pages…and just so you’d know where Burne’s bread was buttered, we are shown nothing but Greystokes curiously un-tanned buttocks for those hundred pages– the Jungle Lord’s crown jewels were hidden in shadows, or behind vines or strategically placed gorillas the whole time.  But, oh those glistening backside orbs were in full display–page after page—bulbously leaping from tree to tree in a cascade of male glute flesh rarely seen outside a clergyman’s rectory. 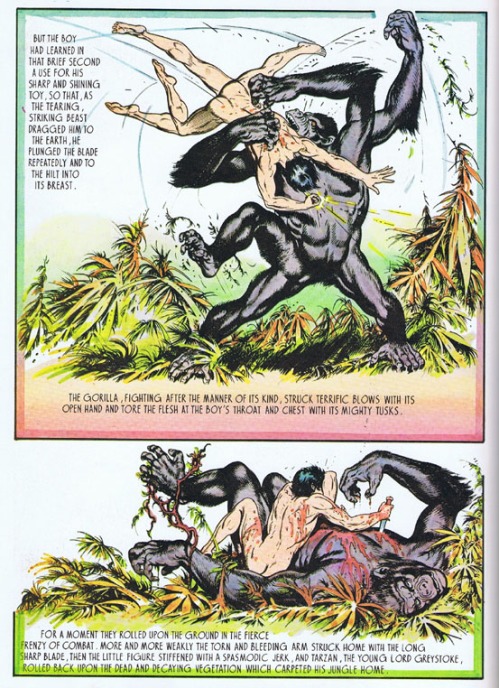 There really is a lot of this, all through the book.

Um...could you check out what's happening in panel one?

EXTRA NAKED POINTS:  Everyone in this scene is stripped to the gonzos, INCLUDING TARZAN’S MOM!  I dare you to fight someone while your mom is watching nude. 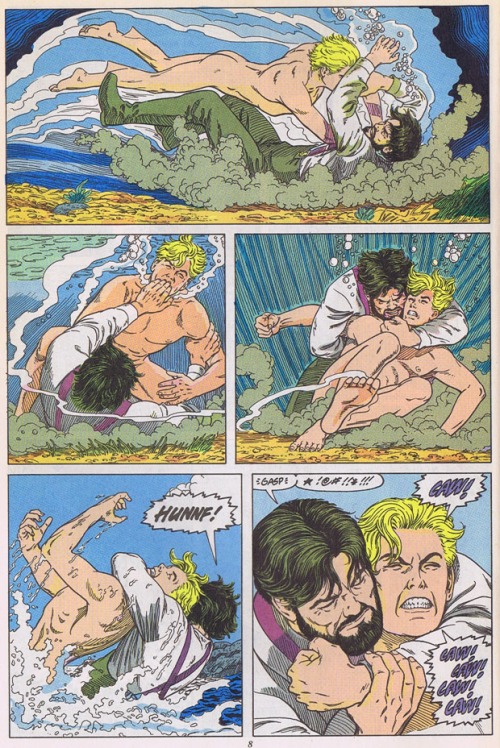 Bark like a sea lion, boy! I said BARK!

If you didn’t want to see an “in the buff” teen-Aquaman fighting a grown man in rubber pants, then why have you read this far?  Seriously.  Some self examination is in order.

Don't sass me, nude boy. I'll teach you who wears the rubber pants around here!

Okay, I get that Aquaman’s origin story was kinda like “Tarzan of the Fish”, and if his dolphin pals weren’t ashamed of their blow holes, why should he be?  But this scene  goes that extra special mile for its entertainment dollar.  It involves, rubber pants, choking, punching, animal noises and a young lad tied starkers and spread in a chair.  That’s at least three-fifty downtown, but the comic retailed for two dollars, quite a bang for your buck in 1989.  You always wondered why Aquaman has such a devoted following–  it’s not just because he can breathe underwater.

How did THIS scene end up in a DC comic?!?

Pants? I know I brought pants...

I wasn’t kidding about how often Logan goes sans pants. They even have a special term to alert the students at the X-Mansion when Wolverine is “sunnin’ the package”: It’s called “mid-afternoon”.

But of all the nudie Wolverine fights, this is the yardstick against which all others are measured.  And if you’re measuring with a yardstick, you’re already impressing me.

The zenith of Logan’s multi-issue

birthday suit wood romp comes when he fights the equally unclothed and competitively hirsute wolves in MCP: WEAPON X #77, and bathes in their mighty blood when it’s all done.  The most badass moment in comics is suitably bare assed and  has been referenced again and again.

Big deal, you gotta take a PILL to be called "Giant Man".

Millar and Hitch’s Ultimates run was a leader in the naked fight scene genre, with an average of one naked fight per 3.7 issues.  The Cap/Naked Giant Man fight from #9 is my favorite, simply because it  involves a giant guy waggling the wand six stories above your head.

One of the most important aspects of a man to man fight is the ability to look your opponent in the eye and say belittling things to him.  But when you have to crane your neck just to glimpse your opponent’s eyes behind his BUICK-SIZED REPRODUCTIVE SAUSAGE, it’s a trifle intimidating!

And Cap hands Hank the beat down that he had coming all the same.  THAT’S why you salute the man with the shield.

WTF? This is in a published comic? At least Bruce is saying "NO".

This can’t be a co-incidence.  There’s no way that the editor was  unaware that the first two words in this naked fight scene are “swish” and “Dick..?”–  WHICH WERE THE TITLES OF MY FIRST TWO HOMO-EROTIC HAIKU!!  Someone had to be spying on me.

And the second page of this memorable sequence begins with another unfortunately worded balloon that I’m not going to type up, in case I enjoy it more than I should.  Just read it yourself…out loud if the elderly are present. 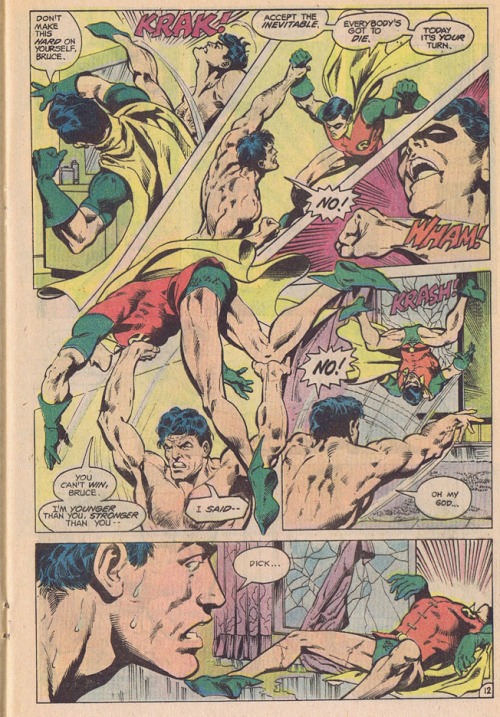 This had to be a prank. This was never published...

And it all ends with a spread eagle boy wonder, and naked Bruce looking down on him, again saying “Dick…?”.  Don’t take my word for it.  Follow Bruce’s stare….Go check, I’ll wait.

It was as though the editorial team at DC had decided to give into the fan mail they’d been getting from “that anti-Wertham” crowd, and just let them have one issue to call their own.

I think the story had something to do with mind control, and Hugo Strange, and something like that.  Did anyone read the other eighteen pages in this issue when people were wearing clothes?  My copy won’t open.

Okay. He's naked, and unashamed. Got it?

This is special in so many ways.  First off, the Ultimate Hulk was a walking naked fight scene from the word go.  That was is raison d’etre, his meaning in life, his chewy center.  He doesn’t care if he defeats the Leader, or The Abomination…he just wants to meet a special someone and settle down, and the nudity was his version of Hulk Sized Foreplay.

This ANNUAL is nothing more than a big, long, extended, full length, and blood engorged naked fight scene that ends in a punch to the cojones that was visible from space.  And the subject

Ohh. Strike one against the Mighty Nards of the Hulk. The "Nulks".

matter of the fight?  Some chick named Zarda gets hired by Captain America to make the Hulk wear pants.  She attacks his Hulklings until he agrees, and then they go to a motel and snuggle like very bad bunnies who are not married to each other, and might not even be considering a formal engagement.   No wonder comics are considered literature nowadays. 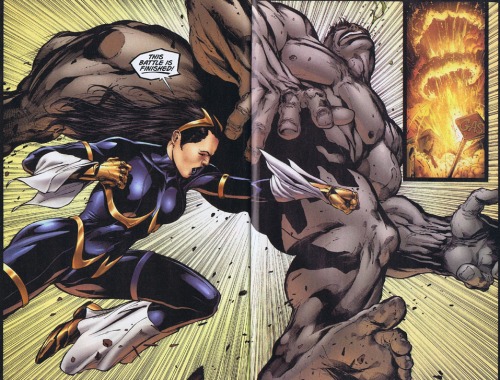 And one more 'nad cruncher, in case you're missing the subtlety of the story. 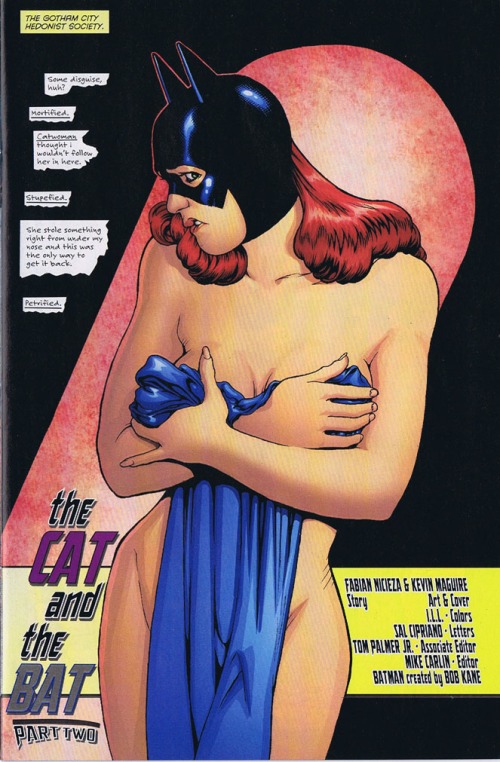 This is why we all evolved to have eyes.

When the end comes, and the world is crumbling around me due to nuclear devastation or social upheaval, this is the comic I take with me to the escape shelter.  Full Respect to Fabian Nicieza and Kevin Maguire for making this objet d’art for us to enjoy. 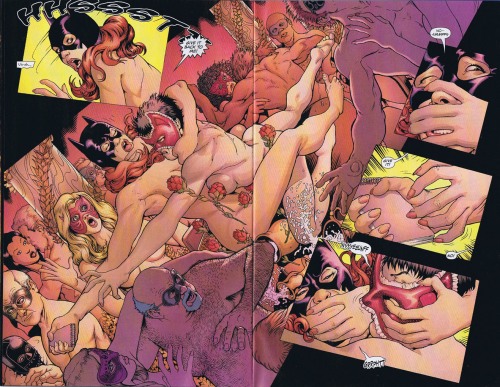 The story has something to do with Catwoman stealing something, and running into an all-nude fetish club to escape Batgirl chasing her…and Batgirl follows her in and stuff happens.  Good god, I’m heterosexual, how am I supposed to remember the plot?

You’ll notice how sparse this list has been for naked super-HEROINE fights…up until now.  Oh, sure, She-Hulk and Black Cat do sometimes get all jiggy with their bid’ness, but they don’t seem to be PUNCHING anyone when they do it.  And Danger Girl and Codename:  Knockout don’t count if that’s ALL they do.  But THIS…?   This is naked fighting, folks, not naked prancing.  You want naked prancing, visit your congressman.

Honestly, it just goes on like this for pages and pages...

There are other naked fight scenes in comics.  I seem to remember Magneto fighting for his life in the shower.  And let’s never forget Bruce Banner’s narrow escape from Jim Shooter’s Traveling Shower Rape Stereotype Duo from that Rampaging Hulk in the Eighties…Ah, those memories I can’t seem to purge.

If you’ve got a naked fight scene you’d like to see featured in this column, please drop us a line.   We’re always willing to look at naked people smacking at each other, whether they’re flying through the air or not.

I’ll see everyone back here tomorrow for some all new BUN TOONS!  A new installment of LAST ROUNDUP ON THE SINISTER SPACECRAFT OF FORBIDDEN LOVE, and MORE!